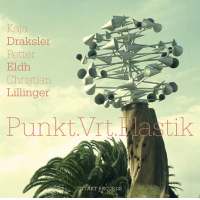 Three outrageously talented up-and-coming players on the European scene join energies on a program of spiky attitude based around rhythmically dynamic foundations. German drummer Christian Lillinger and Swedish bassist Petter Eldh may be best known as the potent bedrock of the Amok Amor Quartet which featured trumpeter Peter Evans. Now they fulfill the same function in a new co-operative trio with Amsterdam-based Slovenian pianist Kaja Draksler, who reveals a more wayward side than manifest on her ambitious octet release Gledalec (Clean Feed, 2017).

Each of the three principals brings charts to this 2018 studio date. The exciting opener "Nuremberg Amok" demonstrates their modus operandi, passing in a blaze of overlapping layers which often willfully avoid intersection, to create an edgy caffeinated feel. Lillinger's stuttery nervy pulsation provides the dominant characteristic, but although fast and busy he promotes stasis as often as momentum. Eldh is a muscular presence, strong enough to anchor counter rhythms and force the pace when needed. It's left to Draksler to carry the melodic material, melding it by way of angular attack and reiterated patterns, over, between and among the intricate yet organic meter.

Theirs is unequivocally a group music. Everyone in the band revels in the thick of the action all of the time, as jagged three way lines punctuate the rich harmonies of "Punkt Torso" and the juddery repeated figures of "Azan." When they do lock in together as they do briefly on "Body Decline," it makes the impact all the greater. In spite of the egalitarian ethic occasional pockets of individual accomplishment appear. One is Draksler's hammered excursion to the extremes of the keyboard on her outstanding "Evicted" and another Lillinger's introduction to his own "Plastic," where he seems to pursue at least two simultaneous ideas in different tonalities.

But the key takeaway is that this is an album chock full of dazzling ensemble interaction.