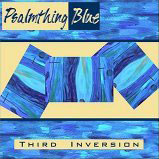 (Author's disclaimer: The guitarist for this group is a contributor to All About Jazz. I discovered this after writing my initial draft and therefore do not consider it an influence in this review.)

The roots of jazz are in religious music, but contemporary worship instrumentals frequently do history no favors. So a 25-minute album of one to three-minute "smooth" songs isn't exactly something to inspire faith.

But Third Inversion's Psalmthing Blue is better than it has any right to be, as the acoustic quartet finds room for expression within the scant space. Like the Cole Porter and George Gershwin recordings the group cites as influences, the easy-on-the-ears tunes get a reasonably thorough harmonic workover of their themes. The brief overall length leaves one feeling short of fulfilled, but there's also no sense of fraud that comes from mindless filler on albums two and three times as long.

Guitarist Tyra Neftzger composed all thirteen songs, with a heavy dose of blues running through most. He alternately picks and strums through acoustic and electric tones, bending and harmonizing notes with enough flair to sustain interest. Six short unaccompanied compositions serve as interludes and transitions between longer songs, offering some substance beyond the theme-and-a-chorus simplicity of many contemporary instrumentals.

His bandmates are interactive rather than merely laying down a rhythm track, elevating this album above that critical line that spells the difference between success and failure. Only on rare occasions does any individual rise up noticeably, such as bassist Dewey Niedit's fleeting solos on "Psalm 77" and pianist Mason Hamillin's somewhat understated work on the up-tempo "Back In 39 Blues," but all feel like a complimentary presence.

There's nothing obviously spiritual about the songs, except for some of their titles. The album opens with "Wildflower Blues," a moody, but brisk 6/8 acoustic piece with the folk overtones heard on many of the longer pieces. A stronger electric R&B element dominates "Song for 69," "Back In 39 Blues" is true to its name by infusing a touch of Django Reinhardt-like swing into the mix, and "Hundredth Hope Blue" closes the album with an accent of contemporary West Coast smoothness. The interludes are often more reflective and subdued, with Neftzger proving plenty adept at carrying appeasing rhythm and lead lines simultaneously.

Psalmthing Blue succeeds at what it offers, but the length alone makes me feel that this should be an EP/introductory disc rather than a full-fledged album. This is especially true since the music isn't revolutionary, merely well-done. Then again, the Bible says it's foolish to use many words when a few will do, and if Neftzger's intent is providing an uplifting experience without beating listeners over the head with a sermon, he certainly has accomplished that.

Visit www.foginc.com for samples of all thirteen tracks from the album.