By Budd Kopman
November 7, 2016
Sign in to view read count 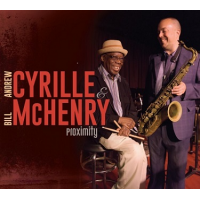 In its 80-year history, the Village Vanguard has had its share of legendary shows and, because of its intimacy, extended gigs and knowledgeable audience, has been the place for a large number of live recordings, including most recently, Enrico Pieranunzi's New Spring.

While Proximity is not a live recording, the impetus for the recording happened at the Vanguard, when regular patron Max Koslow heard saxophonist Bill McHenry and free drummer Andrew Cyrille perform as a duo. The magical feeling that can happen in jazz was so strong that Koslow asked to record them, and here we are.

McHenry has a long history on Sunnyside records, including Ghosts Of The Sun with Ben Monder and Paul Motian, while Cyrille has been a stalwart of the free jazz scene, beginning his career by playing with pianist Cecil Taylor for ten years starting in 1964, and who recently made his leader debut, The Declaration Of Musical Independence on ECM.

Recorded over two days, the session is very atmospheric and concentrated. Much of this is due to the overall sounds which Cyrille chose for each track. This is not busy drumming, for there is lots of room created through the use of tom- toms of different pitches, very little snare or cymbals and the use of light sticks or mallets. The sound is wide and large, rather than sharp and concentrated, but this diffuse sound paradoxically is highly focused. It is easy to hear what so moved Koslow in the club. McHenry plays off of this surrounding sound, and keeps on the thinner side even when blowing fast lines.

The first track, "Bedouin Woman" is positively eerie, but the mood is offset Don Moye's "Fabula" which lightly dances. "Drum Song For Leadbelly" is an adaptation of "Green Corn" by Huddie Ledbetter which manages to evoke the fields of the South. Muhal Richard Abrams' "Drum Man Cyrille" features a very interesting conversation between Cyrille and McHenry and is perhaps the busiest saxophone track.

The title tune features a rather plaintive McHenry with brushes by Cyrille echoing McHenry's breath. In "Aquatic Life" Cyrille begins with light taps to accompany McHenry, but then becomes a second voice, producing the busiest drum playing thus far. "Seasons" is the longest track and features a high, light line by McHenry supported by high-pitched tom-toms and pointed cymbal splashes.

The rather sparse music of Proximity is nonetheless captivating and actually a very emotional experience that feels to be almost like being there.