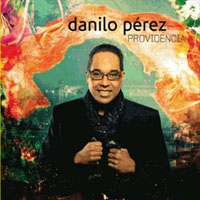 Inspired by the wonderment and challenge of contributing to a healthy future for his two daughters, Panamanian pianist Danilo Pérez presents an eleven-track suite of globally conscious music, fusing elements of jazz, classical and Latin American folk music. Providencia, Pérez's debut for Mack Avenue Records, is an ambitious project, incorporating his longtime trio-mates, bassist Ben Street and drummer Adam Cruz, with an eclectic cast of guest musicians. The result is a genre-defying foray into highly-structured compositions heightened by intense improvising.

A seamless melding of styles is evident on the lengthy opener "Daniela's Chronicles," a piece written for Pérez's eldest daughter that progresses through five buoyant movements. With a subdued undercurrent of rhythmic intensity, Pérez leads his band through the music with commanding control of the piano. Alto saxophonist Rudresh Mahanthappa brings a flurry of energy to "Galactic Panama," tossing solo lines back and forth with Pérez over an insatiable Latin-inspired groove, augmented by percussionists Jamey Haddad and Ernesto Diaz. Mahanthappa appears toward the end of the disc on "The Maze," a duet with Pérez in two parts. Here, the saxophonist is able to balance a harsh urgency with breathy lyricism.

Portugese-born, New York-based singer Sara Serpa, who specializes in wordless vocalizing, brings out the melodic strength in Pérez's writing. She floats effortlessly through the challenging theme of the title track. One of the more enticing tracks on the disc, Pérez takes advantage of the tune's melodic repetition to apply a countering barrage of piano showmanship. Another enduring moment from the session comes with the tender ballad "Irremediablemente Solo," composed by Panamanian composer Avelino Muñoz. The piece features the trio with bassist Street taking up the pensive melody with conviction.

As an organizer of the annual Panama Jazz Festival and the Fundación Danilo Pérez, an organization offering musical and cultural opportunities to disadvantaged youth, Pérez has become a musical ambassador for his native country. Homage to Panama is evident throughout Providencia, especially on the two-part "Bridge of Life," orchestrated for woodwind quintet and trio. The title refers to Panama's role as a land bridge between North and South America. With this disc, Pérez succeeds at creating a musical bridge between the intricate and visceral, inviting all listeners interested in forward thinking sounds.