By Glenn Astarita
January 24, 2015
Sign in to view read count 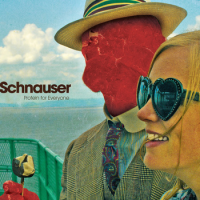 Here's a persuasively inventive British progressive band that recycles protein into music, or so it seems. In fact, vocalist Holly McIntosh is also one of the greatest emulsifier (see Personnel listing) performers I've ever heard. Okay, besides the unconventional album motif, this band successfully transmigrate classic styles into its modish repertoire. With nods to early Soft Machine, Gentle Giant and even The Byrds, thanks to Alan Strawbridge's charmingly archaic twangy guitar licks on "Buon Natale," the band bridges the gap between Indie and progressive rock with a flair for dishing out hummable melodies and more.

Complete with tricky time signatures, harmonious overtones, unanticipated diversions and McIntosh's blithe pop-rock inflected vocals, the ensemble yields a polytonal range of absorbing compositions that swerve between several rock idioms. With a touch of deception and trickery, the musicians incorporate slamming pulses while melding a sense of antiquity with cutting-edge applications. For example on "The Reason They're Alive," keyboardist Duncan Gammon signals remembrances of Soft Machine keys whiz Mike Ratledge's fuzz-toned Lowry organ implementations amid rolling waves that lock into a straight-four groove, hued with additional innuendos from the 70s Brit Canterbury prog scene. They even toss in a frothy Latin-jazz vamp, garnished by McIntosh's tuneful delivery.

Throughout this irrefutably buoyant program, the artists intersperse zigzagging overlays with guitarist Alan Strawbridge's grungy psycho-rock solos and other penetrating group-centric paradigms. The album's cheery closer "Disposable Outcomes" features a sendoff narrative by Gammon. And when he asks if we (the band) brightened your day, I can only retort with a resounding affirmative, while attempting to contemplate what other insightful surprises are in the offing by this insanely hip outfit.