By TROY COLLINS
September 21, 2006
Sign in to view read count 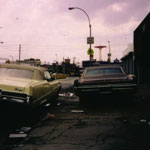 On Prophecies Come To Pass, saxophonist Sabir Mateen's Shapes, Textures, and Sound Ensemble delivers a rousing program of classic free jazz that rarely relents in its intensity. Recorded live in Brooklyn, this album captures the group at its rapturous best. Dedicated to late trumpeter Raphe Malik, the ensemble pushes its post-Ayler dynamics to the heavens.

Multi-instrumentalist Mateen coaxes an array of sounds from his many horns; his alto is light and buoyant, with an assertive edge; his raucous tenor stylings are delivered with a robust tone; the fluid tendrils from his alto clarinet end in keening cries; his flute is somber and delicate. Both trumpet player Matt Lavelle and trombonist Steve Swell generate brassy fanfares and blustery exhortations in line with Mateen's delivery. Swell has a brash timbre, with a tendency towards growling and gutbucket avant gardism. Lavelle's trumpet is brassy and strident, leaving a scorched path in its wake.

Bassist Matthew Heyner and drummer Michael T. A. Thompson are a rough-and-tumble pair, with just enough of an edge to keep the horn players alert and on their toes. Heyner meshes well with Thompson's nervous percussive energy, driving the rhythm section into a flurry of activity.

From the onset of "Sekasso Blues," the front line swoops in with a swaggering gospel-tinged blues that grows increasingly fertile. "Everyone's Got Something To Say" features blistering collective free improvisation and "Children Of The Creator" ends the session with an Ayleresque climax. The title track recalls a more dynamic variation on John Coltrane's "Ascension" theme, sounding epic in its sweep and diverse range of emotions.

Even during the most intense passages, the quintet knows when to leave space. There are numerous periods of frenzied group improvisation, yet the most blisteringly intense moments tend to be balanced out by brief interludes of relative calm and space. Mateen includes a pair of lower intensity numbers. The abstract blues of "Sentimentally" and "The Beauty Within," a poignant set piece for Mateen's delicate flute work and Heyner's bowed bass, provide sonic respite.

The live recording is rough and a bit ragged at times, but that lends itself well to this sort of impromptu document. While nothing in this program veers far from free jazz traditionalism, this is music of conviction and soul. Prophecies Come To Pass is a invigorating example of today's finest free jazz musicians keeping the flame alive.