BY EDWARD BLANCO
November 12, 2015
Sign in to view read count 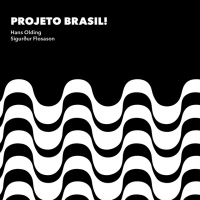 The bossa nova, samba and popular Brazilian music of the 60s and 70s are the main theme on Projeto Brasil!, a stylish collaboration from Swedish guitarist/composer Hans Olding and Icelandic saxophonist Sigurdur Flosason and Kjeld Lauritsen as the duo pay tribute to the music of Antonio Carlos Jobim, Milton Nascimento and Vinicius De Moraes. The two co-leaders provide innovative arrangements to seven Brazilian standards and include two original homages to Jobim and Nascimento in the mix using a non-standard piano-less quintet to interpret the music.

Employing sounds from the alto flute, cello and guitar, the selections on the disc come across with a decidedly classical jazz bent which, when combined with new creative arrangements, provides a fresh new take on familiar old standards that makes them sound like new. The project begins on the first of the original tributes with "Tom," a composition by Flosason that features his alto saxophone voice in a prominent role on a melody that falls perfectly within the Jobim texture and style of music. Nascimento's classic "Cais" flows warmly and lightly as the piece was originally written followed in kind by a gentle treatment of Jobim's "Rancho nas nuvens" featuring Flosason on the alto flute, Olding on a sprite guitar riff and Pordis Gerdur Jonsdottir on the cello.

The classical sound comes to the fore on this rendition of "Modinha" where Morten Ankarfeldt weighs in on solid bass lines in support of joint instrumental voices from the cello and guitarist in a spacious interpretation. Drummer Ola Bothzen makes his presence known with a lightly percussive take of the Jobim standard "Chovendo na roseira" which also highlights the leaders with solo moments of their own. Guitarist Olding pens a tribute to Nascimento on the ambitious and atmospheric "For Milton," another piece of beautiful music exhibiting a taste of the classical in its texture.

The percussions and cello usher in an enchanting version of the gorgeous love song "Retrato em branco e preto" with Flosason's alto saxophone and Olding's guitar playing gently against the background of the soft cello and light brush work from the drummer for one of the memorable pieces of the set. Jobim's lively "Brigas nunca mais" is a departure from the main humble nature of this album with breakout fiery solos from the saxophonist, brisk percussions and solid guitar riffs on, what turns out to be, the most upbeat, non-classical bent piece of the album.

The music concludes with one more embrace of the main classical-tinged theme of the album on a serene and humbling interpretation of Vinicius de Moraes's "Serenata do adeus." Re-imagining the exciting Brazilian music of a long-gone era, is not an easy task but on this unique attempt, guitarist Hans Olding and saxophonist Sigurdur Flosason combine their talents as arrangers and skills as musicians to bring this music alive in new context where the intersection of jazz and classical are fused together in one sparkling musical statement appropriately entitled Projeto Brasil!