By GLENN ASTARITA
November 3, 2016
Sign in to view read count 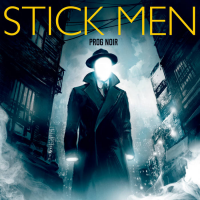 Respectively, the musicians reside in the nucleus of modern era progressive rock initiatives on a global basis; therefore, extensive biographical narratives are beyond the scope of this article. And of course, Levin is a fabled session artist. It would be safe to say that the distinct approach, flavor and supreme technical acumen Stick Men bring to the forefront would not be easily achievable with novices. Here, Levin and Reuter fill out an expansive soundstage with nifty contrapuntal maneuvers and guerrilla bass expositions while extending the band's reach with affable vocals.

From a soloing perspective, the Stick Men embed sustain driven leads with crunching licks atop Mastelotto's slamming backbeats and odd-metered progressions. However, the trio integrates memorable choruses into the grand schema and straight-four punk-ish overtones on "The Tempest." But they implement nimble plucking maneuvers, leading to a grungy opus with distortion-laced backlashes and Reuter's trippy scientific iterations on the good-natured, "Plutonium."

" Schattenhaft" and "Trey's Continuum" are out of the Crimson school as Reuter institutes Robert Fripp-like steel shredding leads with the Touch Guitar methodology, yet "A Rose In The Sand / Requiem" is a full-bodied, unearthly soundscape. And they close it out with a tuneful hook on the up-tempo ballad, "Never The Same."

The trio extends its reach with a bit of a metamorphosis, partly due to the addition of vocals and quirky spoken word passages, lending to a series of works that are framed less on structured jam-based sequences—although they often bust it wide open —and more on song-oriented platforms. It's possibly the band's finest outing to date.