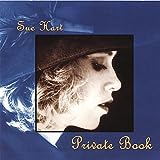 The newest release Private Book by vocalist Sue Hart is a forty-one minute, ten-song presentation of smooth, well crafted jazz inflected music. Hart’s recording is very nice, straightforward and, in an unobtrusive way, quite pleasant to listen to. Those accustomed to a more “soulful” straight-ahead brand of jazz and captivated by the improvisatory art may feel left somewhat short. While Hart possesses a very pleasant voice and she does add some jazz sensibility to her otherwise passive disaffected singing style, she does not improvise vocally, and there is minimal soloing by the backing instrumentalists. A few straight ahead swingers on this recording may appeal to aficionados of “old school” jazz, however most of the Jim Quealy composed originals have Hart sounding like an R&B-oriented pop singer rather than a jazz diva. This recording truly is jazz “light” and it will likely be of great appeal to fans of "contemporary" jazz.

Liner notes to the CD tout that this was truly a “road” album with Hart’s vocal tracks recorded at various locales around the United States in a mobile studio set up by Hart and husband/producer/percussionist James Shattuck in their 35 foot Aerbus motor home. While this is an interesting idea, seeking inspiration from various spots from across America, the prerecorded accompaniment to Hart’s vocals sound somewhat contrived, formulaic, and stilted. Also what might be missing is the opportunity for spontaneous interaction between musicians in communally made music. There are some very bright spots on Private Book. Particularly outstanding is the song “All the Love I Need,” which has a catchy hook in the vocal line, and a melodic guitar solo by Richard Bredice. Although it somewhat is more akin to a tear jerking country ballad, complete with a “whining” guitar in the background, the title cut, “Private Book,” is also an emotional journey worth a listen. Finally, “Eyes of an Angel” also stands out as a tune with a groove that has a fun swinging sound and capable piano soloing by Karen Hammack.

With the popularity of “light” jazz and singers such as Norah Jones, certainly the definition of what constitutes jazz has been enlarged to encompass greater stylistic diversity. While it is true that even some of the greatest vocalists long associated with jazz, such as Billie Holiday and Tony Bennett, have not been improvisers, and they have drawn from a repertory of predominantly pop songs, they still at least have maintained an adequate dimension of the jazz tradition in their singing “persona,” drawn from the wellspring of their forbearers in the art form. With new singers fording the stream of the jazz tradition, the “lighter” sounds of the jazz spectrum may likely be problematic for listeners who are most closely drawn to the traditions of jazz performance. Like other artists who tend toward the lighter side, Sue Hart’s pleasant performance will still likely have broad appeal to that wide-ranging audience that enjoys pretty, less invasive music.

You Already Know, Next Big Thing, Summer, All the Love I Need, Private Book, Eyes of an Angel, Something Wrong, My Only Explanation, Other Side, You and I