By Mike Chamberlain
December 15, 2021
Sign in to view read count 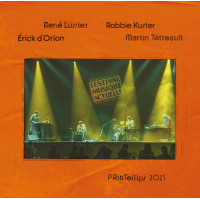 The curious fact about this 52-minute improvisation by Rene Lussier (guitar and daxophone), Érick d'Orion (computer and electronics), Robbie Kuster (drums), and Martin Tetreault (turntables and electronics) is that, as far as we know, it was just the second indoor concert held in Canada after the pandemic started in March 2020, the second concert of the 2021 edition of the Festival International de Musique Actuelle de Victoriaville held in May of this year. As such, it was the first time that these four musicians had played in public in more than a fourteen months, and indeed, in a moment not retained on the recording, Lussier jested off-hand about not being sure what to do.

No worries, as the four musicians dove in enthusiastically right from the start, crackling, squeaking, with Lussier pulling weirdly distorted notes from his guitar, Kuster skittering along but always pushing the music forward. D'Orion and Tétreault provide a highly textured, shimmering background for Lussier's probing and Kuster's dry, understated drumming. The music gradually builds tension to drop out in a hail of feedback and a clattering of drums before moving into the next part of the improvisation.

The performance was done as a single improvisation, but for the recording, the music has been broken into seven segments, the divisions occurring at the moments when the four musicians reach a moment of silence before exploring another motif. Lussier wrests otherworldly sounds out of the daxophone (a wooden, bowed instrument) on the second "piece" as Kuster repeats a wobbly figure and d'Orion and Tétreault punctuate with slyly comic interventions. In fact, humor always plays a role in the music of Lussier and Tétreault, and this set is both joyful and gently witty, as are the titles given to each of the sections.

The performance holds interest throughout, not surprisingly, as these experienced improvisers have not just technical ability but also the ears and the willingness to hear and coherently respond to one another while taking the music in interesting directions. The fact that none of the musicians had played live in more than a year did not seem to matter. If anything, the return to the stage seemed to heighten the focus.