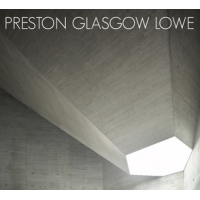 Don't let the triple-moniker business-like name fool you, these ain't no suits and this is an excellent start for PGL's eponymous debut album. A flurry of repeated shimmering phrases introduces "Colour Possesses" which shortly after its brief guitar opening evolves into multi-tracking embellished with programmed synthesizer, leading to a resonance of Robert Fripp and the League of Crafty Guitarists mixed with Terry Riley, but faster. This opening salvo is, if you will, PGL's calling card, laying down the parameters within which they intend to operate.

On "Elephant And Castle" David Preston deploys incredible lightning-fast guitar runs elegantly mirrored by Kevin Glasgow's six string bass guitar. The fluid bass work from Glasgow never fails to impress, and especially with his spectacular solo on this track. David Preston supplies Allan Holdsworth-esque streams of notes on "Everything In Everything" and Laurie Lowe's powerful yet lithe drumming heard here and throughout is more than a match for any other heavy duty skinsman on the scene.

Preston employs some unusual, discordant and curiously appealing double stopping on "The Priory" which works well and at times evinces an almost hypnotic effect. After a deceptively sedate beginning to "C:/>PU," a frenetic staccato guitar vamp—similar to the dramatic intro to The Supremes "You Keep Me Hangin' On"—leads into a short but intense Robert Fripp-like solo. This track, arguably the album's apogee, typifies the sheer intensity of the trio.

But by stark contrast, Preston's versatility is amply displayed on the first section of a three part suite entitled "Within You" which opens with an exquisitely virtuosic guitar solo, similar in tone and execution to the great Jim Hall. The second section of the suite features a four minute engagingly dynamic and skilled drum solo by Lowe, indisputably proving that this is not just another guitar band.

The final section of the suite features Preston executing an articulate, predominantly finger-picked style of archtop electric guitar playing, characterised by a chiming bell-like tone and consequently sounding closer to Pat Metheny here. The final number, "The Anvil" sees Preston oscillating from Metheny mode to Holdsworthian coruscating virtuosity. Comparisons may be odious but they are useful in gaining any sort of perspective, so whilst David Preston isn't Fripp or Holdsworth or Metheny, he is most definitely a guitarist to reckon with and we will be hearing much more from him and his fusioneer colleagues, Kevin Glasgow and Laurie Lowe in the future.

There is no doubt whatsoever that this is a brilliant debut album showcasing the respective talents of three exceptional British musicians. So maybe the name is appropriate because these guys certainly mean business. They are the business.

Colour Possesses; Elephant And Castle; Everything In Everything; The Priory; Song To The Citadel; C:/>PU; Within You (Parts 1-3); The Anvil.