By IAN PATTERSON
January 18, 2015
Sign in to view read count 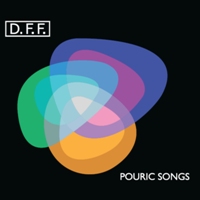 D.F.F. is a seven-piece super-group founded by multi-instrumentalist/songwriter Dave Flynn and Pouric Songs is its stellar debut recording. The versatile Flynn is also the man behind the Clare Memory Orchestra—a fusion of Ireland's leading traditional and classical musicians—so it's no surprise that D.F.F. blends genres and colors so seamlessly. Pop, rock, African rhythms and folksy balladry have all gone into the melting pot to produce a vibrant, celebratory idiom. Acoustic and electric guitar rub shoulders with cello and mbira; congas, bongos, claves and shakers stir the blood, while vocal harmonies lift the soul.

Flynn forms a potent song-writing team with lyricist Pádraic Ó'Beirn on sunny, life-affirming tunes that celebrate love. There's nothing kitschy or melancholy about these dozen songs either, just pretty poetry and bright melodies. The grooves too invite head-bobbing and uninhibited dancing. Sitting still is not really an option.

Dual drummers/percussionists Aidan Dunphy and Cion O'Callaghan lay down simple but infectious back-beats and myriad percussive accents, simmering gently or driving hard according to the music's contours. Alongside bassist Dan Bodwell—and on several tracks with rhythm guitarist Ciarian Swift in harness—they form a powerful rhythm team. Vyvienne Long shares vocal duties with Flynn and lends chamber chic to the septet with cello that purrs buoyantly one moment and unleashes penetrating riffs the next.

Congolese guitarist Niwel Tsumbu informs the set heavily with jubilant playing in a style more typical of South African music. After a decade in Ireland, Tsumbu is well known for his versatility and his virtuosity and he has rarely sounded better. His cascading, dancing lines on upbeat fare like "Mad for You" and "Phantom Moves" elevate finely crafted tunes into the realm of the sublime. The delightfully cheery "Beautiful Freaks Like Us" segues into the aptly named "Funky Freak," where the guitarists steers the band into epic jam territory that resonates like a Caribbean Grateful Dead.

Flynn and Long sing as one on the cantering panoramic tale "Skin to the Bone"—a Paul Simon-esque ode to spring and hope eternal; rarely do a strummed guitar, a bass motif and the human voice combine to sound this uplifting. Long's ethereal, choral vocals introduce "Stone Walls," a jaunty tune crowned by a rhythmic climax evocative of Mike Oldfield, featuring cello, guitars and percussion in thrilling unison.

D.F.F. seduces at slower tempos too, on songs like the pastoral "Woodlands," the lilting vocal duet "Beauty Becomes You" and the slowly spinning "Quartz." The latter track in particular exudes a peculiar hypnotic charm, with cello and Tsumbu's guitar weaving colorful, atmospheric lines. The celebratory "Harvest Do" and the equally optimistic "The Mad Magician" blend melody, harmony, bouncing rhythms and vivid lyrical imagery that entice from the first notes and don't let go. The dreamy "Lullaby" with its gentler rhythms and hushed, echoing vocals closes an impressive set on a low-key note.

Sophisticated yet instantly accessible, the enchanting Pouric Songs is surely one of the finest pop debuts to come out of Ireland in many a moon. In times when the world often seems to have gone truly mad, D.F.F.'s rainbow music is a joyous balm.

Mad for You; Phantom Moves; Skin to the Bone; Stone Walls; Beautiful Freaks Like Us; Freaky Funk; Woodlands; Harvest Do; Beauty Becomes You; Quartz; The Mad Magician; Lullaby.