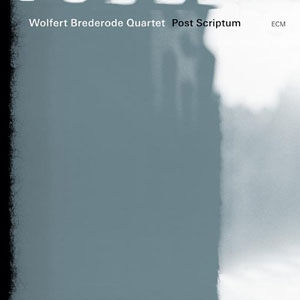 At a time when the world is becoming an increasingly busy and, in some cases, hostile place, it's easy to forget the power of music, to create a space away from the demands and stresses of day-to-day life, where it's possible to just sit back, absorb, and become absorbed in something transcendent. Music doesn't always have to be pretty, but when it is, it needn't preclude the more complex emotions that comprise the human condition. Pianist Wolfert Brederode's 2008 ECM debut as a leader, Currents came after Susanne Abbuehl's two sublime records for the label, including Compass (2006), and it seemed clear that the pianist shared much in common with the Swiss-born, Dutch-resident singer's aesthetic, continuing the same exploration of piano, clarinet and drums, but adding Norway's increasingly ubiquitous bassist., Mats Eilertsen (The Source, Jacob Young, Thomas Strønen's Parish), to give his quartet greater sonic range.

Post Scriptum builds on Currents's strengths, as time and experience has honed a clearer group sound. Unlike Currents, whose 11 tunes came solely from Brederode's pen (with the exception of one collaboration with Abbuehl), Post Scriptum leans towards greater egalitarianism, with Eilertsen contributing three of its fourteen pieces, and clarinetist Claudio Puntin and drummer Samuel Rohrer each getting one credit apiece. So attuned are the four players, however, that even though some of the material has been heard before—both the softly driven "Wall View" and rubato tone poem, "Aceh," first appeared on Eilertsen's own Radio Yonder (Hubro, 2009)—here, with bass clarinet and piano replacing tenor saxophone and electric guitar, the overall complexion is considerably darker and richer, with Rohrer adopting a gentler approach to time than Radio Yonder's fiery Olavi Louhivuori.

Brederode's writing continues to explore a myriad of lyrical concerns. The opening "Meander" sounds of a kind with Currents' "Common Fields," though it's clear the pianist's pen has become firmer, more assured. Beginning alone with a series of delicate arpeggios, the group patiently coalesces around Brederode as the song assumes more definitive form, with Puntin the lead voice on a serpentine melody that crystallizes into a lengthy solo section, first for Puntin, then for Brederode, building in dramatic intensity, driven by Eilertsen's spare but perfect choices, and greater drive from Rohrer. Eilertsen's near-vocal arco winds a space-filled melody over a gently persistent eighth-note piano pulse on "Angelico," double-bass slowly intertwining with clarinet as the dynamics build and a curious percussive texture, sounding like it comes from a voice but so buried in the weeds as to be difficult to discern.

The session's overall sound may, in part, be the result of recording at France's Studios La Buissonne this time, rather than Oslo's legendary Rainbow Studio—or it may simply be the quartet's greater collective aplomb, combining free-spirited interpretive beauty with unexpected moments of angularity, and a disposition that favors melody and construction over pyrotechnics. Post Scriptum not only affirms the individual strengths of its players, but the increasing confidence and delicate abandon of a whole far exceeding the sum of its not inconsiderable parts.