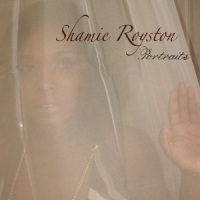 Pianist Shamie Royston shares more than familial bonds with her husband/drummer Rudy Royston and employer/sister/saxophonist Tia Fuller; she clearly shares their oft-demonstrated belief that music is about expressing oneself by placing your own personality and experiences into and onto your art. In truth, every artist worth their salt, knowingly or not, adheres to this philosophy in some way, shape or form, but Shamie Royston uses it as a mission statement of sorts for her debut album.

Portraits presents an uncompromising artist who's willing to bear everything, from the ferocious to the religious and beyond, in an effort to truly show herself to the world. Through it all, Royston makes it clear that she isn't simply the smiling face on the back cover of her CD or the serious and moody figure on the miniature inset photos; she's both of those people and more.

This mostly originals session showcases a trio that's as feisty as it is focused. Rudy Royston's raw power cuts like a knife early on, with tour de force performances on "The Beast Within" and "Run," but finesse finds him when guest vocalist Camille Thurman joins in on the calming "In This Quiet Place." His range is ever-evident, as his sticks gently dance atop the cymbals one minute (Horace Silver's "Summer In Central Park") and revel in the pugnaciously percussive the next. Bassist Ivan Taylor is the straight man on the date, willing to hold down the fort while Mr. and Mrs. Royston skulk and strike ("The Beast Within"), but he also serves as Rudy's wing man. Together, they expertly navigate the rhythmic shifts and turns that come their way ("Inner Strength"); they prove to be a rhythm team in the truest sense of the phrase, but they're also a support team for Shamie, who shines throughout. She constantly pleases, whether punching, swinging or pianistically singing, and she proves that no single portrait can express her entire being; in fact, a single album probably isn't enough, but it will have to do for now.