By BRUCE LINDSAY
October 28, 2014
Sign in to view read count 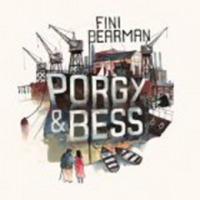 For her second album, singer and songwriter Fini Bearman moves away from the original songs of her debut, Step Up (Feenz Beenz Records, 2011). She chooses instead to delve into one of the best-known operas of the twentieth century—George Gershwin's Porgy And Bess. It's a work that has inspired some major jazz performers, including vocal greats like Ella Fitzgerald and Billie Holiday. Tough acts to follow, but these interpretations hold their own particular magic.

The London-based Bearman makes no attempt to present the entire story, but she's programmed her chosen songs (arranged by Bearman, guitarist Matt Calvert and drummer John Blease) so that there's a narrative to be followed through the album. It isn't necessary, however, for each song stands alone, with its own narrative strength. Never heard of Porgy And Bess? Never mind, these are songs with universal themes that transcend the confines of Gershwin's plot.

"Gone, Gone, Gone" finds all five performers at their most intense—Bearman's vocal gets emphatic support from the instrumentalists in this attacking, powerful, arrangement. "My Man's Gone Now" is a downhome, downbeat, blues: Bearman's despair is almost tangible, Calvert's guitar reflects the despair and in so doing magnifies its impact. This arrangement was inspired by Robert Plant and Alison Krauss' Raising Sand (Rounder Records, 2007), which co-incidentally features an Everly Brothers song titled "Gone, Gone, Gone."

"I Got Plenty Of Nuthin'" lightens the mood, bringing some respite from the emotional intensity that characterizes most of these performances. Lyrically, it's the closest these songs come to uncomplicated joy, matched musically by Blease and bassist Jon Cox's jaunty rhythm. The sense of contentment is fleeting, however. Bearman's next selection returns to the more downbeat worldview of the opening songs as she invests "Porgy, I'm Your Woman Now" with a purity and innocence that both heightens Bess' optimism and renders it the more poignant.

Jimi Hendrix gets credit for inspiring a bluesy, guitar-led version of "It Ain't Necessarily So." Calvert's guitar playing is fiery and vibrant (as is Ross Stanley's Hammond solo), the whole band at its rawest and most aggressive—it's closer to under-appreciated blues-inspired '70s Brit bands like Vinegar Joe and Babe Ruth than it is to the Experience, though.

Bearman's vocal on "I Loves You Porgy," while not as subtle as Holiday's, is just as poignant—Bess' optimism has gone, her hopes for a life with Porgy now fading. "There's A Boat That's Leavin' Soon" gets a smooth-as-silk soul treatment (Donny Hathaway is Bearman's reference point). Calvert and Stanley craft two more excellent solos, Bearman's voice is at its most sophisticated. Heartbreak is rarely this beautiful.

"Prayer (Summertime)," with its wordless vocal, is atmospheric but doesn't scale the musical or emotional heights reached by "There's A Boat That's Leavin' Soon." Closing the album with that song's futile hope for a better tomorrow would have been a masterly way to end things. As it is, Porgy And Bess is still a magnificent achievement.

Gone, Gone, Gone; My Man's Gone Now; I Got Plenty Of Nuthin'; Porgy, I'm Your Woman Now; It Ain't Necessarily So; I Loves You Porgy; There's A Boat That's Leavin' Soon; Prayer (Summertime).