By MARK SULLIVAN
October 16, 2016
Sign in to view read count 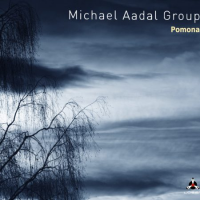 Proof that great Americana music can come from unexpected places—Norway, in this case. Pomona Avenue in Fullerton, California was the original location of the famed Fender factory. Guitarist Michael Aadal used only solid body guitars on this album—a Stratocaster and a Telecaster, the most iconic Fender models. That says something about the sound of Pomona, but it says just as much about the attitude. Aadal's compositions go to the roots of blues, country, and jazz, but they remain stylistically fluid. Aadal says "It's all about the song and the melody and creating a good collective band sound." There are definitely solos, but not the conventional "jazz head plus solos" approach.

Aadal's guitar partner is pedal steel/lap steel guitarist Anders Hofstad Sørås, joined on the front line by tenor saxophonist André Kassen. The rhythm section is anchored by pianist/keyboardist Ole-Bjørn Talstad, with acoustic bassist Audun Rama and drummer Gunnar Saeter. This is the group's third album. Aadal wrote all of the tunes, but arrangements are credited to the entire group.

The opening track "The Border" illustrates the approach well. The song builds up in layers, pump organ in gentle support, building to Aadal's solo, then building further as Talstad switches to piano for Kassen's solo. "Purgatory" has a similar folksong-like sound, with both guitars playing the head. The "Iceland" portrayed here is a dramatic place, but it could be a northern locale in North America. On "Leaving" the guitar again gives way to a burning saxophone solo, even more intense than the one on the opener. The album projects a remarkably consistent mood. Aadal's writing and playing recall such solid body guitar stalwarts as Mark Knopfler and Bill Frisell: like them, he seems to be traditional and contemporary at the same time.