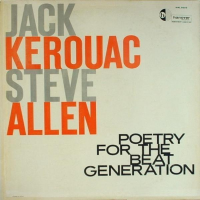 Jack Kerouac is most famous for his iconic novel On the Road, a book which helped define an entire generation of drifters, hitchhikers, poets and musicians (although not exclusively in that order), all of whom Kerouac collectively coined as "The Beat Generation." Upon publication in 1957, On the Road was celebrated by The New York Times Gilbert Millstein as "a major novel," one which he considered as being just as important to the lost generation of the '50s as Hemingway had been to that of the 1920's.

That Kerouac was a writer and sometimes poet goes without saying, but he also recorded and released a trio of albums, which did extremely well, heightening his popularity even further. Released in 1959, Poetry for the Beat Generation was Kerouac's debut, and came about likely at the behest of TV personality, comic and musician Steve Allen, after having performed on stage with Kerouac at the Village Vanguard in 1957.

Jack later described the 1958 recording session thus: "I came up to New York from Florida for the date, which was arranged by mail, and went into the studio to meet Steve at 1pm. I was carrying a huge suitcase full of untyped manuscripts of prose and poetry. He started to play the piano, making a sign to the engineer. They turned on the tape. I started to read. We finished the session in an hour."

Allen, who was older than Kerouac, may have seemed like an incongruous choice in creative partner, but Allen's gentle, intelligent piano proved to be a perfect foil for Kerouac's spoken-word delivery, as evidenced on opener "October in the Railroad Earth," where for over seven minutes the two are in perfect simpatico with one another, even if neither were scarcely aware of where the whole thing was going.

Throughout, Kerouac takes an almost jazz-like approach, with a delivery that is in equal measure monotone as it is melodic. Shorter pieces such as "Deadbelly" and "Charlie Parker" are colourfully executed, as is "The Sounds of the Universe Coming in My Window." Whether it's the goofy play on words of "Goofing at the Table," "Bowery Blues," or "The Wheel of the Quivering Meat Conception," Kerouac never flubs his lines once (each 'performance' was done in one take), impressive considering some of the lines he had to recite: "Eating at rock/and Pleiades of Time/Pestiferating at moon squid/Salt flat tip fly toe/tat sand traps/With cigar smoking interested/puffing at the stroll."

Steve Allen's piano glistens behind Kerouac's sonorous exclamations on "Abraham," "Dave Brubeck," and the lovely "The Moon Her Majesty." "I Had A Slouch Hat Too One Time" could be something off a Tom Waits album, lyric-wise, as perhaps could the rest of this LP, come to think of it.

At the time, Kerouac was not without his detractors (Truman Capote was certainly not a fan, saying that his work "isn't writing at all—it's typing.") Yet despite such criticism, Jack's contribution to more modern day literature, and indeed popular culture overall, has been immense. Many of the music industry's iconic mavericks, including Bob Dylan ("Subterranean Homesick Blues" anyone?), Tom Waits, Jim Morrison and David Bowie, were all under his spell at one time or another, as was actor Johnny Depp (whom I'm sure would love to play him if the opportunity ever arose).

Kerouac will forever remain on the fringes, too intangible for the bourgeoisie, too uncouth for the literati, just like his contemporaries William Burroughs and Allen Ginsburg, Kerouac was always in a class of his own, who just didn't give a damn what anyone thought of his work. Poetry for the Beat Generation, along with his published works, would unwittingly make Kerouac a cult figure among a new generation of existential misfits and adolescent weirdniks the world over.

Kerouac himself once confessed: "I have nothing to offer anyone but my own confusion." True. But what a delicious cesspool of confusion it was.

October in the Railroad Earth; Deadbelly; Charlie Parker; The Sounds of the Universe Coming in My Window; One Mother; Goofing at the Table; Bowery Blues; Abraham; Dave Brubeck; I Had a Slouch Hat Too One Time; The Wheel of the Quivering Meat Conception; McDougal Street Blues; The Moon Her Majesty; I'd Rather Be Thin Than Famous; Readings from On the Road & Visions of Cody