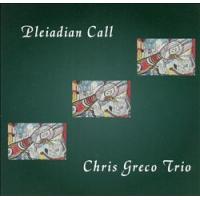 A recurring topic in some jazz mainstream press these days involves the proliferation of independent labels and their potential to dull the music's quality with mediocrity. Somewhere in the argument lurks trust in infallible A&R departments with unlimited resources. Sony's not done signing people yet, but until they get around to Chris Greco, be happy he runs his own label. Pleiadian Call finds the multi-reed musician in good company with Chris Colangelo on bass and Kendall Kay on drums and percussion.

Greco wrote the nine compositions with serial and bitonal applications, yet he resorts to very little dissonance. He seems to have a love affair going with his instruments. He troubles to shape tones and keep the upper register sweet. Some players shoot darts up high; Greco blows pearls.

'Yvette' yields the kind of perfumed elegance you'd expect from its name. Opening with a sultry flute and clarinet duet, plus melodic playing by Colangelo, the tune becomes a tour de force for Greco's flute with a solid rhythm section support. Colangelo plucks a meaty solo with impressionistic percussion by Kay. 'Rains and Prayers' begins with Greco on tenor and Colangelo in unison with Kay on percussion. Colangelo jumps on an activating bass line and Greco runs with it. 'Innocence' employs a nonchalant theme, but goes through tempo changes with the leader on alto.

'The Flight of a Bird Leaves No Trace' won a Julius Hemphill Award for composition and again features Greco's flute. The mini-suite features a number of varying sections showing off his versatility with Colangelo interspersing plucked and bowed passages. 'Ask' ambles along with the leader on alto. Kay dusts off the brushes and Greco makes a run for it. 'Messages' gives him a medium tempo vehicle for tenor, and 'Afterthought' uses a flute and soprano arrangement to introduce an urbane theme for his swinging soprano solo.

For those fearing the Bite of the New, Greco and Co. provide a painless escort into exotic and unfamiliar territory. For the more seasoned listener, Greco makes driving high speed over twelve tone roads sound easy.