The Whammies: Play The Music of Steve Lacy Vol. 3, Live 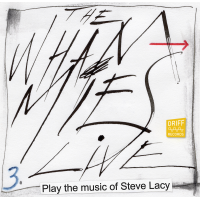 The third volume of Steve Lacy dedications by the cover/not cover band The Whammies is a live recording from their 2014 tour. Recorded in Italy and Austria, the band performs their self-described "instant-arranging" of mostly Lacy tunes that in true-to-form fashion elicit surprise and clever improvisation.

Saxophonist Steve Lacy, who passed away in 2004, would certainly be pleased.

This international band led by Dutch saxophonist Jorrit Dijkstra and Greek-born Boston-based pianist Pandelis Karayorgis keep the flame of his music burning, much like Lacy did in the 1960s for Thelonious Monk, in the band School Days that he co-led with trombonist Roswell Rudd and in his many solo soprano saxophone dates. The sextet is completed by Chicago musicians Jeb Bishop (trombone) and Jason Roebke (bass) and Dutch musicians Mary Oliver (violin/viola) and drummer Han Bennink.

The disc opens with the Lacy composition "Bumpers." Certainly the influence of Bennink's percussive hijinks locates this piece in a cartoon realm that wouldn't be out of place in a Carl Stalling soundtrack to a Warner Brother's cartoon. Same for "The Kiss" an interaction between Oliver's strings and Dijkstra's analog wind synthesizer. This third edition emphasizes individual players and their distinctive approaches to music making and improvisation.

The Sun Ra dedication "Sublimation" (written by Lacy, but never recorded) bounces and parades into the omniverse with a nod to Ra's fondness for all things that sizzle and spark electric. Roebke's bass grounds Dijkstra's lyricon and Bishop's big-shouldered trombone blasts. The music fires on all cylinders here, whether the band is quoting Lacy or quoting Lacy reciting Monk.

The Whammies take on Lacy's treatment of Monk's "Hornin' In" is the album's gem. It is a Harlem rent party via Bimhuis in Amsterdam. Bennink's jungle pulse opens the tune, and is followed by Oliver's chamber string invocation to publish a graphic novel of Monk's music drawn by Lacy. Karayorgis' always idiosyncratic style doesn't so much mimic Monk, as recognize the great man's lineage. The piano gallops and hotfoots over the piece with the freedom invented by Monk and perfected with Lacy's horn.