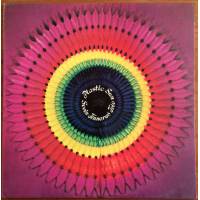 From the early years of Norwegian jazz, few albums have stood the test of time as well as the venturesome and subtly psychedelic Plastic Sun. It was the Svein Finnerud Trio's second disc, and was released on Sonet in 1970. Inexplicably for an album of such beauty, it has been a hard-to-find collector's item for decades, having only been reissued once before, in 1998, as a CD on the Norwegian Jazz Federation's Odin label. In April 2018, Odin have reissued it again, this time on CD and in a 180-gram vinyl audiophile-edition. A historic work has been restored to wider circulation. The Svein Finnerud Trio—pianist Finnerud, bassist Bjørnar Andresen and drummer Espen Rud—was a prominent presence on the Norwegian avant-garde in the late 1960s and early 1970s. The group pioneered ideas that later found an international audience through ECM albums by the likes of Jan Garbarek, Arild Andersen and Terje Rypdal. The trio itself never recorded for ECM, probably because by the time Manfred Eicher's label hit its stride in the mid 1970s, Finnerud had become more involved with painting than he was with music. By the time the trio's third album, Thoughts (Prisma), was recorded in 1974, Andresen had succeeded Finnerud as chief in-house composer. The group went on hiatus shortly after the album was completed and did not record again until the 1990s. Finnerud passed away in 2000. Plastic Sun spans a broad stylistic range, from funk and gospel-infused interludes through proto-ambient meditations and turbocharged collective-improvisations. It is an acoustic album, but the soundscape is rich in timbral invention, and engineer Egil Eide—working with limited technical resources in a studio at the Henie-Onstad Art Center outside Oslo—must have been key to turning the group's ideas into reality. In interviews, Finnerud acknowledged the formative influence of Paul Bley and his trios. The epiphany, apparently, was a concert Bley, bassist Kent Carter and drummer Barry Altschul played in Oslo in 1965. Two of the tunes on Plastic Sun, "Cartoon" and "Touching," were written by Annette Peacock, Bley's then wife. Another early inspiration was Ornette Coleman, whose "Dee Dee" is also included. The remaining five tunes were written by Finnerud or Andresen. This third time out of the traps, efforts are being made to give Plastic Sun some international traction. Better late than never.