By Douglas Payne
December 1, 1999
Sign in to view read count 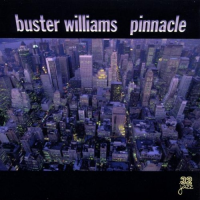 One of the great losses to jazz is that Herbie Hancock's 1970-73 Mwandishi band could not have been as profitable as it was protean, progressive and ever too-briefly productive. Launched from the spaces that fostered Bitches Brew, Hancock introduced elements of both the avant-garde and soul jazz to create a groove that was as unusual and provocative in sound as it was striking in its musical excellence.

With the exception of the drummer, each member of the sextet cut his own Mwandishi styled record. Henderson made two for Capricorn (1974-75) and Maupin (1974) and Priester (1973) each recorded one for ECM. Bassist Buster Williams made his solo recording debut for the Muse label in 1975 with this one, Pinnacle, a Mwandishi-styled recording recently reissued by 32 Jazz.

Whereas the other Mwandishi members recruited band mates like Hancock for their solo projects, Williams opts here to recreate the sound keeping only drummer Billy Hart from the original band. Onaje Allan Gumbs is especially Hancock-like on the occasionally electric eclectics (notably on the funky "The Hump") and more frequently required piano backbone (especially appealing on the gospel-ish "Noble Ego" and the more exotic "Batuki"). Reed players Earl Turbinton and Sonny Fortune share duties recreating the swagger and the sweetness of Bennie Maupin, while trumpeter Woody Shaw brings his own trademark bop sound to the title track and "Batuki." The addition of Guilherme Franco's percussion and vocalists on "Noble Ego" and "Pinnacle" suggest that Pinnacle is a descendant of drummer Norman Connor's Mwandishi-like records, Dance of Magic (1972) and Dark of Light (1973).

The program's five long selections, four by Williams himself, set up interesting ostinatos that allow for thoughtful, well-considered improvisation. Williams himself is outstanding, particularly well featured in his self-designed spaces and never as out of place or obstructive as a strong rhythm player can too often be. He suggests that he had ably developed a language beyond the more familiar diction of Ron Carter and one that clearly laid the foundation for Stanley Clarke.

But even as a launch pad for often exquisite playing, the spacey, riff-based tunes fail to engage the listener the way such later Williams compositions as "Toku Do" and "Air Dancing" would - although the waltz-like "Tayamisha" comes close. Still, Kosmigroove listeners and Mwandishi fans will want to hear this music and it's of more than passing interest to those interested in the wide-ranging sounds of Williams, Sonny Fortune, Woody Shaw and Onaje Allan Gumbs as well.