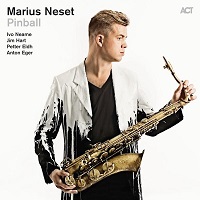 Though Marius Neset thrives in small ensemble settings, his writing has increasingly exhibited orchestral ambition, as witnessed on the thrilling Birds (Edition Records, 2013), which saw his quintet augmented by brass, accordion and woodwind instruments to spectacular effect, and on Lion (ACT Music, 2014), a powerful outing with the Trondheim Jazz Orchestra. The aptly named Pinball sees Neset in equally expansive mood, navigating often complex charts with his core quintet bolstered on half the tracks by cello, violin and flute. If that sounds like an exercise in chamber jazz then think again, for these breathless larger ensemble pieces burn with the intensity of a little big-band. In one sense, Pinball can be seen as a continuation of ideas explored on Birds, but Neset extends his signature vocabulary here in subtle yet significant ways, with Anton Eger credited with co-writing half the tracks.

The marvellous stew that is "World Song Part 1" is veritably bursting with colors, from sweeping Aaron Copland-esque themes and hints of South African motifs and Celtic jigs to sunny Caribbean flavors. Neset's multi-layered melody soars with unbounded joy and his burrowing tenor solo is matched by the energy of Eger and Petter Eldh and further buoyed by Ivo Neame and Jim Hart comping. The tempi are more measured on "World Song Part 2," with Hart central to the chapters. Tied by name, a recurrent melody and bookended by clapping, these two tunes together form a captivating mini-suite.

Introspection and unabashed lyricism are also a big part of Neset's idiom: the leader's purring tenor paves the way for Neame's lightly scurrying blues, on "Odes of You," a mellifluous ballad equally shaped by Eger's spacious back-beat, Eldh's deeply sonorous bass and sotto voce Hammond organ. In the sparser duo settings of the sombre "Music for Cello and Saxophone"—with Andreas Brantelid—and "Music for Drums and Saxophone"—a curiously infectious percussive meeting—Neset reveals contrasting aspects of his musical range. Neset's visit to the Brecon Jazz Festival in 2014 likely inspired "Aberhonddu" (the town's original Welsh name), a pretty collage of textures and melody.

"Jaguar" is a feisty straight-ahead tune stoked by Eldh and Eger, as first Neame and then the leader, switching from tenor to soprano, stretch out. The set is rounded out by the gentle strains of "Hymn from the World," a brief solo feature of layered saxophone parts evocative of Neck of the Woods (Edition Records, 2012), Neset's haunting collaboration with tuba player Daniel Herskedal.

Like the pinball of the title, Neset fairly zings his way around vast musical terrain, ringing bells aplenty and scoring heavy points at every ricochet. Pinball is another important addition to Neset's short, yet already highly impressive discography.