By Tyran Grillo
December 15, 2014
Sign in to view read count 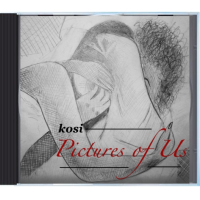 Following her solo debut, One More Cup of Coffee, New York singer Kosi surrounds herself with a full band, armed with a fresh set of originals (plus a couple of standards), ready to take on the world. Whereas that first album featured only guitar and voice, now we encounter trumpet, bass, drums, and tenor saxophone from musicians that understand exactly the mood she wants to create. Despite the larger roster, the overall feeling is open, free, and easy. That said, there's nothing free and easy about Kosi's delivery, which makes no excuses for its emotional gravidity. Singing from the chest and from the heart, she unearths deeply buried jewels of exposition from the strata of every song.

Kosi's voice is such that the other instruments trace their own cages of light in the thickness of her shadow. Self-assessment pervades every lyric, and nowhere more so than in "I Already Know." Like so much of Kosi's work, it elicits all the more power for so honestly revealing a lack thereof. It is a premonition of brokenness that wraps its fingers around a bottle of poison marked LOVE and chugs until empty. "Brianna" is another intensely personal song, which along with "Valerie" draws a thread from heart to heart, turning a thaumatrope of past and present until the illusion of their coincidence bleeds melody. These two tracks are also the album's most urban, evoking rain-slicked streets and the memory of an opportunity lost in a matrix of impossible encounters.

Other songs dip into a variety of stylistic pools, ranging from blues to bossa nova. In the latter vein, "Lovers' Song (Be the One)" is a gentle diversion that ends an album of hard- won emotional insights with the magic of catharsis. Coffeehouse chic gets a makeover in "Your Angel," a passionate and remarkable highlight. Accompanied only by guitar and bass, Kosi confronts social and romantic resistances in one fell swoop. Combining the gentility of the haunting "Untitled Art Song (in e minor)" and the groovy undercurrent of the title track, it puts the "ship" in "relationship," setting sail toward horizons of a monolithic resignation. Even the old standbys feel less substantial in the presence of her own songs. "Wild is the Wind" opens the album with smoothness and beauty, while Duke Ellington's "The Star-Crossed Lovers" expands in Kosi's wordless vocalizing. But the power of her songwriting and the delivery thereof are her bread and butter. Each of her songs could itself become a standard someday, setting precedents along the way for the space she occupies with such unabashed wit.