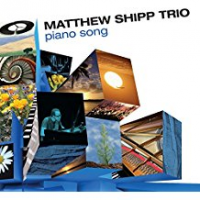 Matthew Shipp has long been considered one of the leading pianists of his generation. Collaborating with artists from wide ranging genres over the past three decades, Shipp has maintained a distinctively singular vision with an immediately recognizable sound. Publicized as Shipp's final release for Thirsty Ear, Piano Song follows in the footsteps of The Conduct of Jazz, his 2015 trio recording for the revered label, although he is slated to remain curator of the imprint's ground-breaking "Blue Series."

Shipp's current working group features esteemed veterans Michael Bisio and Newman Taylor Baker. Bisio has been Shipp's regular bassist since Art of the Improviser (Thirsty Ear, 2011), and has repeatedly demonstrated an intuitive affinity for the leader's oblique methodology. Baker replaced longstanding drummer Whit Dickey on the trio's previous effort, and has proven to be perfectly attuned to the synergistic rapport shared by Bisio and Shipp.

The most approachable offering in Shipp's vast discography thus far, Piano Song regales with memorable melodies and infectious rhythms. The brief unaccompanied piano soliloquy "Links" opens the album with pensive romantic flourishes, easing into the date's conceptual centerpiece, "Cosmopolitan," a jaunty swinger whose boppish momentum interpolates the familiar bass line of Miles Davis' "So What." Despite its harmonious nature, the deceptively intricate tune offers a salient demonstration of Shipp and company's abilities to deconstruct forms in suspended time—accessible, but also adventurous.

Somewhat more restrained than earlier efforts, a number of pieces deal with texture in a minimalist manner. The cinematic tone poem "Blue Desert" for example, traffics in exotic tonalities, driven by delicate shaker rhythms, spectral bass harmonics and spare piano chords. Similarly understated, the mid-tempo ballad "Silence Of," and the vibrant solo piano meditation "The Nature Of" share more than a syntactic naming convention, unfolding as open-ended compositions in a state of flux. Embodying the unit's visceral tendencies, thrashing numbers like "Microwave" and "Gravity Point" are brisk, angular explorations, while the title track finds Shipp at his most lyrical, eschewing bombast for tenderness, closing the varied session as it began, with a contemplative flair.

Imaginatively incorporating conventional melodies, harmonies and rhythms into their dynamically fluid interplay, Shipp and his sidemen offer a unique take on the venerable piano trio tradition. Avoiding the stereotypical formal limitations of both the mainstream and avant-garde, Piano Song stands tall as one of the finest moments in Shipp's vast oeuvre.