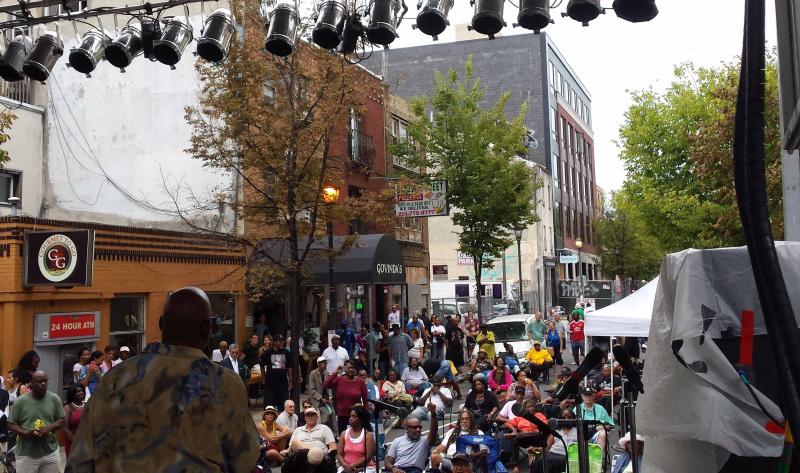 If this review reads more like an op-ed piece than a detailed concert review, circumstances made it happen that way and enthusiasm created it. On the run, after grabbing a cannoli and a double espresso in the Italian Market, this reviewer had only just enough time to stop by at the Philadelphia United Jazz Festival to say hello to his friends, Warren Oree and Graziella Dinuzzo-D'amelio, co-directors of Lifeline Music Coalition, who arranged and sponsored the event with the help of local community organizations and funding sources. While there, he heard snatches of the great groups of Julian Pressley, Sam Reed, and Jamaaladeen Tacuma. Live music has been heard up and down South Street, but never of this caliber. If you add Bobby Zankel and Odean Pope to the list of performers, you're already talking about today's most creative, advanced jazz players, not to mention the many other fine talents who participated on a state of the art sound stage as well as in bars, restaurants, and a vest pocket park along the three block corridor of South Street from Broad to 17th Streets. And it was all free outdoors, and nobody seemed to mind the slight drizzle that came on in the late afternoon. They were too wrapped up in the music and the fun.

Oree and D'amelio already have a serious track record of producing jazz festivals in Philadelphia. Having spent the last decade successfully coordinating the Philadelphia Jazz and Poetry Festival, the West Oak Lane Jazz Festival, and the Friday Night Jazz Series at the Woodmere Art Museum, it came about that two years ago, amidst a flurry of jazz activity in the Center City area, they started the current yearly festival at the Philadelphia Clef Club, and last year moved it outdoors to encourage community involvement and bring back some of the spirit of South Street, once the place "where Hippies meet," and now re- gentrified and a hot area for bars and restaurants, if a bit less artsy then in its 1970s heyday.

What impressed this reviewer in his brief excursion around the festival area was not only the music -he wished he had time to hear more of it -but how much it reminded him of experiences at the Newport Jazz Festival, the New Orleans Mardi Gras, and various street festivals on MacDougal Street in New York's Greenwich Village. It was ALIVE!!! People were relaxed, meeting up with friends, and enjoying themselves. Musicians mingled with the crowd. There were rows of booths for food and flea-market style shopping. It had authentic ATMOSPHERE! A pleasant dive bar called Bob and Barbara's had a recording of Nina Simone singing "Little Girl Blue" on the juke box instead of the soporific Musak you hear in most joints. People could soak up and absorb the music into their souls rather than listen to it in a detached manner.

Warren, Graziella, and Lifeline Music Coalition are really on to something with this. Warren, of course is a jazz bassist who famously leads the Arpeggio Jazz Ensemble. Graziella is a PR and marketing professional who simply loves jazz. More than entrepreneurs, they do it for sheer love of the music, the people, and the community. This is where the Op-Ed component comes in. It is simply a way to say that jazz belongs back in the community and on the streets where it began a century ago. The nightclubs are intimate "laboratories" where the musicians play to a small audience to develop their ideas. But jazz is part of the American community and increasingly the global village as well. The Lifeline Music Coalition, the Jazz Bridge, and other organizations have been exemplifying this idea for some time now, but the time has come for it to really take flight, to warm up our city with the original American Classical Music of freedom and dignity. As Pharoah Sanders chanted, "The Creator has a master plan. Peace and happiness for every man." By hosting more events and celebrations of this kind, Philadelphia can become a lively magnet for jazz once again. And the culmination would be a jazz festival that rivals the magnificent events held in the cities of Europe and Japan. Let's bring jazz back home to America again, and let's bring it home to the City of Brotherly Love, where our country was initiated by a few people with a good idea and genuine conviction.