Home » Jazz Articles » Kendrick Scott Oracle: We Are The Drum

Kendrick Scott Oracle: We Are The Drum

By Dan Bilawsky
September 17, 2015
Sign in to view read count 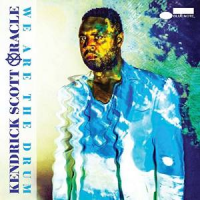 While drummer Kendrick Scott's namesake outfit—Kendrick Scott Oracle—has been around in some form since 2006, it's a band that's really come into its own in the last few years. With the arrival of Conviction (Concord Records, 2013), Scott made a major statement on a high-visibility label; jazz listeners and critics both took note. With We Are The Drum, his debut for the storied Blue Note imprint, he raises the bar even higher, melding complex ideas and completely accessible sounds.

While Scott cites his instrument in the title of this album, this is not a drum-centric record. Yes, there are drum solos, be they introductory in nature ("Mantra," "Never Catch Me") or weaved in and out of an entire song likes waves fiercely arriving and breaking at the shore before receding ("We Are The Drum"). But these solo displays are more about capturing or creating the spirit of a song than anything else. No single instrument dominates these proceedings and there's a democratic spirit at play throughout this album.

The music presented on We Are The Drum doesn't come at the listener so much as it surrounds and envelops. This band gazes across vast sonic landscapes with a panoramic mindset. Mike Moreno's gleaming guitar lines connect with John Ellis' horns or spiral around them, bassist Joe Sanders finds open spaces to insert his ideas, Taylor Eigsti's sparkling piano lines illuminate the atmosphere, and Scott expertly steers things without ever succumbing to any sort of standard groove-making formulas. He has a rare gift in that he's able to create rhythmic stability without the need to subscribe to any form of rhythmic repetition.

While there's no shortage of high-energy music here, and Scott is perfectly happy throwing one down the middle ("Synchrony") or taking a soulful detour with guest vocalist Lizz Wright ("This Song In Me"), the most compelling moments on this album aren't the most fiery or the most direct. Evolution and exploration are the dangling carrots that encourage deeper listening. In one case, elegant arco work may lead the way to more energetic environs ("Milton"); in another, the act of questioning is at the heart of the matter ("Make Believe"); and in a third, gorgeously winding melodic lines seduce and continually draw the ears in deeper ("Lotus"). By fully embracing the search for meaning in sounds, We Are The Drum wins out.