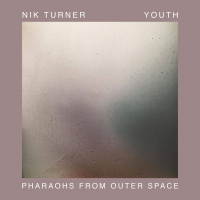 Pharaohs From Outer Space is one of three albums launching British experimental / ambient label Painted Word. The label has been formed by post-punk band Killing Joke's bassist Youth, who describes the album—which he produced and co-headlines with Nik Turner, saxophonist with psychedelic space-rockers Hawkind—as "a nod to Sun Ra and Alice Coltrane." It is mellifluous, multi-layered, chill-out music which sits comfortably with Brian Eno's dictum that good ambient music does not demand the listener's attention, but that it rewards such attention if it is given.

On the basis of their emergent years, neither Turner nor Youth would seem obvious candidates for a successful foray into ambient music. In their first incarnation, Hawkwind, of which Turner was a founder member in 1969, was known for two things—the ingestion of colossal quantities of LSD and amphetamines, and a level of musicianship which barely rose above entry level. The late bassist Ian "Lemmy" Kilmister, who left the band to form Motörhead, is a fairly representative example of early Hawkwind personnel on both fronts.

Killing Joke, of which Youth was a founder member in 1978, emerged from the same druggy milieu in London's pre-gentrified Notting Hill Gate area as Hawkwind. The band's style fused the spirit of Motörhead with gothic rock and what would become known as industrial rock.

But all was not wholly as it seemed. Turner's musicianship was more sophisticated than that of Hawkwind's other founder members, and late 1970s Youth's frame of cultural references encompassed much more than heavy rock. Turner left Hawkwind in 1976 (he rejoined for a few years in the 1980s), Youth left Killing Joke in 1982 (he is currently part of the reunited original line-up), and both musicians have subsequently notched up prolific and varied recording histories.

In the bumph accompanying Painted Word's launch discs, Youth cites the arthouse ethos of ECM as an inspiration for his own label. Whether Painted Word goes on to achieve as much as ECM remains to be seen, but Pharaohs From Outer Space is a promising start.

About Nik Turner and Youth