By Dan Bilawsky
November 18, 2021
Sign in to view read count 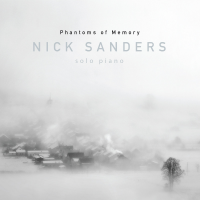 While the evolutionary arc of the COVID-19 calamity hampered progress for large-scale productions across the globe, the entire scenario, coupled with isolated artists' drive for creative expression, led to a massive uptick in the smallest of formats. At no time in recent memory—or really ever in the recorded history of jazz—have we seen such a steady flow of solo statements. Impelled by a need to design and discover while lacking the means to safely gather, so many members of the jazz community birthed, bred and brought music to market all alone, shining a light on their core essence in the process. For pianist Nick Sanders, the experience produced Phantoms of Memory.

The idea of a solo record had been on Sanders' mind for a number of years, but the direction for the project—writing classically-inspired compositions which speak to his early influences while toying with perception of the past—didn't start to take shape until around 2019. Then, as the world stood still in 2020 (and beyond), he found the time to turn that concept into reality. Presenting nine short pieces which were composed in a state of seclusion, Sanders looks to another time while drawing those thoughts to the keys. "Stained Glass Memory" calls on fond thoughts of the church from childhood, creating an expansive and advanced hymn-like aura; "Wish for Rapture" comes in with concern and questioning, later alternating between starry-eyed sentiments and somewhat dour designs; "The Spinning Door" offers a near unceasing flow of energy, nodding to Philip Glass without aping his mannerisms; and "Simple Redux"—the longest track on the album, at just over five minutes—strips away anything even remotely superfluous, prioritizing pensive purity in its unfolding.

"Dancing in an Empty Room," a waltz taking its main inspiration from Frédéric Chopin, adds modern touches to Romantic notions and sits at the very center of the program. Then Sanders offers a percussive pronouncement to introduce the largely eremetic "Typhon's Memory," lets fingers fly for the wild 43-second lifespan of "It's Just Anger," glides across the canvas on the Sergei Prokofiev-indebted "Waltz for Future Spectres" and plays things out with bucolic beauty on "Hallowed Grounds." Clear, concise and wisely concerned with an aspect of the past-future continuum that sidesteps the same old story in jazz, Phantoms of Memory leaves traces of its name in its wake.