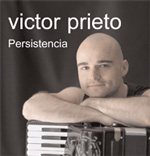 One of the inherent problems in utilizing the accordion for harmonically complex music such as jazz lies in the fact that the left-hand chord buttons are preset, strictly limiting choices for chord construction as well as comping techniques. Prieto has straddled this limitation via custom adjustments to his instrument—don't ask, it's top secret—and by adding voices to his left hand chords by layering in notes with the right hand, resulting a harmonic textures unprecedented on this ax.

Persistencia features six original tunes by Prieto, along with covers of Brazilian composer Egberto Gismonti's "Frevo, Argentinian tango-maestro Astor Piazzolla's "Libertango, and John Coltrane's "26-2, the latter a three-in-one key workout from the Giant Steps album. Prieto's own compositions range from lyrical to neo-boppish to progressive. "Muiñeira da Carmen, "Persistencia, and "Only for You are wistful and romantic; "Freva, "Contrasts in NY, and "Mugares have angular lines and unusual harmonies; while "Mundos Celtas sounds like an Irish reel or jig, interspersed with sections of drawn-out, atmospheric chords.

The members of the trio work well together. Allison Miller's brushwork on "Muñeira da Carmen, her rolling tango-esque fills and feathered high-hat on the outro vamp of "Libertango, and her conversational counterpoint on "Persistencia are adroit and apropos. Bassist Carlo DeRosa is also excellent, particularly during his strolling intro on "Persistencia, his interactive commentary during Prieto's solo on "Mundos Celtas, his bowed vocalisms on "Libertango, and his driving solo over the samba groove of "Contrasts in NY.

Prieto's playing is stellar: virtuosic without seeming to be in a hurry, his melodic phrases materialize nonchalantly, commanding but never imposing, gaining momentum and urgency when inspiration strikes. The accordionist's linear vocabulary is unusual, at times hard-bopping, yet never quite resolving as "expected." His tone displays a horn-like quality—"breathing," swelling, and fading with the motion of the bellows—while his harmonic accompaniment often detours adventurously in parallel and symmetric motions that flirt with quasi-tonality.