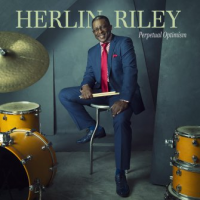 Herlin Riley, a drummer from New Orleans, is a member of the Lincoln Center Jazz Orchestra, led by Wynton Marsalis. Indeed, he played a large part in developing the drum parts for the Pulitzer Prize-winning album by Marsalis, Blood on the Fields (Columbia, 1997).

On his own album, Riley leads a mainstream quintet playing five of his own numbers, Gene de Paul's lovely ballad "You Don't What Love Is," Victor Young's "Stella By Starlight," Ellis Marsalis' "Twelve's It" and Willie Dixon's knockabout "Wang Dang Doodle," on which he takes a joyous and highly competent vocal.

It's a wonderfully relaxed mixture, a reminder of what mainstream jazz is all about, or should be—having fun yet being creative. There's some great music here, notably Godwin Louis' alto on "Touched," the stand-out track, which also features fine bass by Russell Hall. Then there's Bruce Harris' trumpet on the choppy "Rush Hour." Throughout, Emmet Cohen's piano and the leader's drums hold everything together.

The Latin-tinged title track is a light-as-air foot-tapper, with Godwin Louis doing a fine job on saxophone before Cohen takes over. Add some words and it could be a show tune. Riley's drumming propels the number along but without ever drowning out the others.

"Wings and Roots" features more fine saxophone and some excellent ensemble passages. Louis gets down to it on "Wang Dang Doodle," where Riley's vocal is suitably low down and funky. He returns for an encore on "Twelve's It," in which he pays a tongue-in-cheek tribute to the song's author.

If more albums like this were being made today, the world wouldn't be in the terrible state it's in. People would be far too happy to want to do the dirty on one another.

Rush Hour; Be There When I Get There; Borders Without Lines; You Don’t Know What Love Is; Perpetual Optimism; Touched; Wings and Roots; Wang Dang Doodle; Stella By Starlight; Twelve’s It.