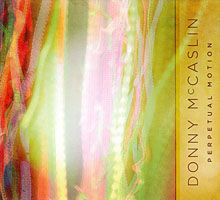 Perpetual Motion is tenor saxophonist Donny McCaslin's first dedicated foray into the electrified realms of funk, R&B and soul. A renowned soloist whose memberships in Dave Douglas' Quintet, Mingus Dynasty and the Maria Schneider Orchestra have won him great acclaim (including a Grammy nomination for his work with Schneider's Orchestra), McCaslin has delved into groove-based territory in the past, but never as exclusively as he does on this simmering electro-acoustic platter.

The majority of the date is founded on hard-hitting funk vamps and percolating polyrhythms, though a few pieces sidestep convention, revealing McCaslin's stylistic diversity. The atmospheric "Firefly" is one such example, gradually developing into an impressionistic rubato ballad, highlighted by Benjamin's spacey, over-driven Fender Rhodes cascades. Proving to be a perfect foil for McCaslin, Benjamin's two-fisted piano and Rhodes variations on the bluesy R&B of "Memphis Redux" transcend lyrical convention, fusing nostalgia and futurism into an ingenious hybrid.

A capable writer of engaging themes, McCaslin's real strength lies in his virtuosic, stream of consciousness solos. Confidently balancing inside and outside traditions, McCaslin gracefully modulates from blistering linear runs and plangent lyrical refrains to exacting altissimo figures and multiphonic accents, revealing a sophisticated sensibility that demonstrates his wide-ranging appreciation for the tradition, in all its guises.

Supported by the congenial interplay of his band mates, McCaslin's Olympian tenor excursions are copiously documented throughout the session, especially on the marathon title track, which encapsulates his entire dynamic range. A magnanimous leader, McCaslin also provides ample room for his sidemen to shine. Lefebvre's futuristic, efx-laden bass solo on the fusion-laced "L.Z.C.M." and Sanchez's kinetic duet with the leader on the intro to the wicked post-bop number "Claire" are notable highlights.

Buoyed by an outstanding ensemble, McCaslin reveals a facet of his artistry on Perpetual Motion that has been primarily relegated to his sideman gigs and a few tunes from his earliest records, proving yet again that he is one of today's most diverse, engaging and talented performers.