By Dan McClenaghan
February 9, 2006
Sign in to view read count 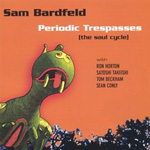 The cover certainly does grab at your attention. It's hard to say what that thing is. A War of the Worlds creature gone goofy? It does give you a clue that New York-based violinist Sam Bardfeld doesn't take himself too seriously. Another clue in this direction is the spoken word intervals—"The Saul Cycle"— inserted throughout and incorporated into Periodic Trespasses.

Working with the concept of "all music tells stories," Bardfeld spins a whimsical tale about a guy who doesn't know whether he should "pursue a career in periodontal surgery or dive into the unknown seas of his long-repressed dream, to become a master of Renaissance krummhorm."

The stories may be whimsical, but the music, with Barfeld's violin stretching its long notes around Ron Horton's trumpet and Tom Beckham's vibes, gets a serious treatment that results in a sometimes lighthearted romp that hints at Eastern Europe in spots, flirts with Cuba on "Harry's Mambo," and at times gives off a Steven Bernstein/Diaspora Hollywood mood.

"Saul's Long Night" opens the set with Ron Horton's stuttery, then fluid trumpet solo over a light vibraphone glow, joined by Bardfeld, who injects some elasticity into the group interplay. And while the front line has a lighter than air feeling, the bass/drum rhythm of Sean Conly and Satoshi Takeishi provides a firm tether.