BY JOHN KELMAN
February 6, 2009
Sign in to view read count 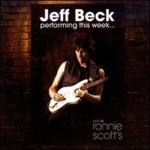 Of the trifecta of British "guitar gods" that emerged in the late-'60s—Jeff Beck, Eric Clapton and Jimmy Page—Beck is the one who, regardless of style, has best embodied the spirit of jazz. His performances are always chancy propositions because he's always been about taking great risks, and they don't always work. Whether or not Beck's shows are totally successful, they're always worth the ride because he makes complete exposure the very lifeblood of his music. When Beck is on—as he clearly was during the week from which Performing This Week... Live at Ronnie Scott's was culled—there are few who can touch him for sheer emotiveness, raw energy and a near- vocal expressiveness that leaves most guitarists in his wake trying to figure out just how he does it.

Still, how he does it is not as important as that he does it, since Beck has demonstrated a frustrating tendency to disappear without notice and then suddenly reappear on the scene throughout his lengthy career. With one of his best live groups in years—keyboardist Jason Rebello, drummer Vinnie Colaiuta and young bass phenom Tal Wilkenfeld—Beck is at the top of his game, burning through a 70-minute set of material ranging from the gripping "Beck's Bolero," from his 1968 debut, Truth (Epic), to the seemingly-impossible bends of the amblingly up-tempo "Nadia," from You Had It Coming (Epic, 2001). Beck also pays homage to contemporaries John McLaughlin and Billy Cobham on a smoking "Eternity's Breath," from Visions of the Emerald Beyond (Legacy, 1975) that segues into the hard-rocking "Stratus," from Spectrum (Atlantic, 1973).

Beck's tone has always been instantly recognizable, proving the magic is in the hands, not the technology. While the distinctive quality of Beck's playing has always been acknowledged, he's rarely provided evidence of the kind of virtuosity that would place him on par with guitarists like McLaughlin. His vernacular may not be as broad, but when it comes to shredding, Beck's high octane virtuosity on the frenzied and lightning-fast version of "Scatterbrain," from his classic Blow by Blow (Epic, 1975), is just plain staggering. Elsewhere, Stevie Wonder's "Cause We've Ended as Lovers," also from Blow by Blow, finds Beck at his most poignant; his judicious use of whammy bar, volume control and naturally impeccable note placement making it a definitive performance of this enduring tune.

Colaiuta and Rebello are ideal accompanists, with plenty of cathartic energy when needed and no shortage of viscerally propulsive rhythms. Performing This Week's other star is, however, Wilkenfeld, who seemingly came out of nowhere a couple years back as one of the most versatile and exciting young electric bassists to emerge in years, capable of unshakable grooves and solos that demonstrate a maturity and taste beyond her years.

With a stellar group, a stunning cross-section of career-defining material and his own playing never better, Performing This Week... Live at Ronnie Scott's is the live album Jeff Beck fans have been waiting for...and the perfect entry point for those who've never had the pleasure of making his acquaintance.