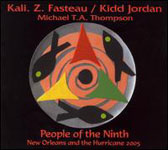 In the waning days of September, 2005, the entire U.S. population watched as hurricane Katrina developed into a monster storm and seemed to take aim directly for New Orleans. Just at the last moment, the storm swerved a bit and weakened, allowing people to think that, once again, the bullet had been dodged.

And then, as the storm passed, the levees broke and a tragic tale of loss, anguish, greed, stupidity, conspiracy theories and heroism began to play out. Tenor saxophonist Kidd Jordan, who lived for a long time in the low-lying Ninth Ward is joined by multi-instrumentalist Kali Fasteau and percussionist Michael T. A. Thompson to produce People Of The Ninth, which was recorded in the late night of September 25th, shortly after the levees broke.

This powerful music cannot be separated from the events that instigated it. We have entered the realm of music as almost pure emotion without it being translated into melodies, rhythm or harmony and hence needing interpretation.

Jordan leads the way, with Fasteau reacting and feeding back almost instantaneously. Listening to these two musicians play almost as one is a fascinating experience. Howls, moans, cries, screams, sighs and, yes, a thankfulness to be alive surround the listener. The effect is both terrifying and enlightening in that a listener who merely watched Nature's fury is transported into the maelstrom and its aftermath.

Thus, the music produces emotional images and can be deeply disturbing, being much more than sound painting. "Rising Winds," for example, is terrifying in context, but also fascinating to just listen to as Fasteau's cello and Jordan's saxophone interact, first in their very high ranges and later as they spread out. On "Rescue Denied" Fasteau uses a piano to make unearthly, foreboding sounds to support Jordan's emoting through the entire range of his sax.

Music is hard to write about in any case, and simply attempting to describe the broad range of sounds created would be a waste of time. Using labels such as free jazz or avant-garde are meaningless for this music, especially when Jordan plays a recognizable snippet that shocks the ear.

It would be prudent to prepare yourself ahead of time for the impact of this music, but as a sage once said, "Turn down the lights, turn up the volume, close your eyes and see how the music makes you feel."