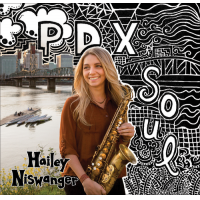 Saxophonist Hailey Niswanger's third release is a stylistic departure from her previous bop based two. Dedicated to versatile Portland based keyboardist Janice Scroggins, who passed away shortly after the recording, the engaging PDX Soul primarily channels an old school funk energy and a retro R&B charm. Scroggins and her rhythm section lay down an electrified backdrop against which Niswanger blows her alto and her soprano with fiery abandon.

In fact Niswanger's solos are almost the only spots of spontaneity on this otherwise sleek and handsomely crafted disc. One exception is "You Should Know." The track features, in addition to Niswanger's gritty, rousing sax embellishments, trumpeter and producer Thara Memory's unique scatting that delightfully merges intense soulfulness with jazzy sensibilities. Guitarist AG Donnaloia takes center stage briefly with his blistering rock inspired phrases.

Memory also exhibits his inventiveness as an instrumentalist with his lively trumpet lines on "Look Out." Niswanger's intriguing and agile monologue matches Memory's in originality as it dances to the exciting, horn heavy groove. Another refreshing and spirited moment comes as Niswanger engages in a gritty sax duet with vocalist Andy Stokes on the bluesy James Brown-ish song "Let a Woman Be a Woman, Let a Man Be a Man."

There are a few tracks where the creative momentum slacks a bit. For instance, although guest vocalist Tahirah Memory sings evocatively on "Yes I'm Ready" the overproduced lilting melody and Niswanger's airy, soft notes flirt dangerously with the prosaic sounds of "smooth jazz." Meanwhile "Skytime" opens with Donnaloia's tad too sweet guitar lines and some generic Latin-hinted beats. Niswanger's full-bodied tone and intelligent performance rescues it from syrupiness.

There is no doubt that PDX Soul is an enjoyable album. It demonstrates that Niswanger's talent is not genre confined and that she can get "down and dirty" with the best of them. It may, however, disappoint fans of her past work even as it gains her a wider audience. Given the extent of her creativity as an improviser hopefully she will resume her previous career path making this just a temporary detour, albeit an aurally pleasing one.

I'm Gone; Skytime; Say What It Is; Let a Woman Be a Woman, Let a Man Be a Man; Yes I'm Ready; You Should Know; Look Out; Take Me To The River.