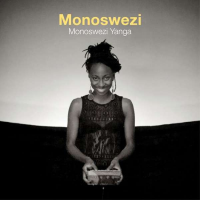 A while back I picked up a copy of a 1971 Smithsonian album featuring the traditional mbira music of the Shona People of Rhodesia (now Zimbabwe). It's a valuable ethnomusicological recording, but unless one is from that culture, the appeal may be limited. The mbira, though, is a fascinating instrument and I longed to hear more of it, perhaps in a more modern context.

That's where Scandanavian/African group Monoswezi comes in. Monoswezi Yanga is their second album on Riverboat Records, and sets the mbira in a context that, while I'd hesitate to call it strictly "jazz," certainly contains elements of jazz. The mbira, also known as the thumb piano (among many other names) is the forerunner to the more modern kalimba. It's constructed of a piece of wood, sometimes within a resonating chamber, outfitted with a series of tuned metal tines which are plucked with the thumbs. The mbira is the national instrument of Zimbabwe, and is closely tied to that region's culture and religion, going back thousands of years. The instrument is traditionally played by men, which makes Monoswezi even more unusual, as their mbira player is a woman, named Hope Masike.

Masike's mbira is the centering instrument of the album. Each song revolves around it and her vocals, along with the voice of Calu Tsemane (who also plays percussion and guitar). Saxophone and clarinet are provided by Hallvard Godal, joined by Putte Johander on bass and Erik Nylander filling it all out on additional percussion, drums, harmonica and harmonium. The band laid down the basic tracks in Johander's home studio on Sweden's remote Koster Islands, where they were then mixed. Masike then provided feedback from her homebase in Zimbabwe.

The liner notes for Monoswezi Yanga refer to one track ("Nhetembo") as a "fantasia for mbira." According to the Oxford English Dictionary, one of the definitions for fantasia is "A thing composed of a mixture of different forms or styles." This definition applies to Monoswezi, as well, from their sound to their name. The moniker denotes the origins of their members: MOzambique, NOrway, SWEden, and ZImbabwe. In addition, the word "mono" in Greek means "one," while "swezi" translates to "world" in a native South African language. These synchronicities all align to create a very fertile cross-cultural musical fusion.

The pieces are based on traditional folk songs from Zimbabwe, as filtered through a Nordic consciousness, plus a newly written piece by Tsemane. Themes include the celebration of marriage, respect for the environment, remembrance of deceased loved ones, and standing up for one's rights. All against a full, groove-oriented, percussion-heavy backdrop. In general, the songs are laid back and smooth.

Second song "Povo m'povo" sets a sort of template, joining soothing clarinet riffs, melodic mbira and the singing of Masike and Tsemane, all of which which dance above a steady beat. The song is introduced by Masike as a song about people who "find pleasure in taking other people's things." Her spoken intro is a bit jarring coming out of the mellow melange of percussion and wind instruments in the previous "Intro" instrumental, but from then on out the album is music and music alone. Some highlights include the breathy saxophone in the second half of "Mbira Yanga" and the more energetic "Lobola," which features a soulful sax solo. "Mhondoro," despite its somber melody line, has a swaying, shuffling rhythm which keeps the song from becoming too ponderous.

The last song, "Nhetembo" (unfortunately one of the shorter tracks) showcases the mbira particularly well, in this case a bass mbira. The bass mbira's deep sound is exotic and mysterious, with Masike's accompanying wordless vocals recalling bird songs in a primeval forest.

Monoswezi Yanga, as a collection of songs performed by a very diverse ensemble, shows that the mbira is an instrument more than capable of holding its own. Distinctive enough to shine when it needs to, but sympathetic enough to blend into the larger picture when the song requires. The album is important for its merging of cultures and ideas, but also for the natural symbiosis the musicians demonstrate, which never feels forced. The music should appeal to a wide spectrum of listeners, from connoisseurs of African and world music, to jazz lovers, to the average person who just wants to chill out with relaxing, yet rich and multi-layered sounds.