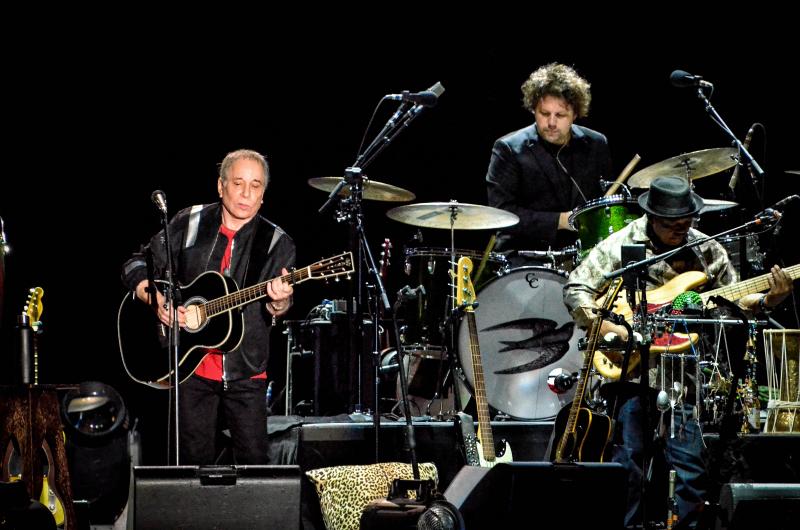 "Hello, my friends!"—so began Paul Simon's farewell concert, held in the New York City borough where it all began. The location, Flushing Meadows Corona Park, was the site of two World's Fairs (1939 and 1964), and is, according to Simon, a twenty-minute bicycle ride from where he grew up.

The two-and-a-half-hour, career-spanning concert represented a perfect close and fitting end to Simon's touring career. The locale was important as well. Simon described it as being "two miles from where I played high school baseball in Forest Hills." He even donned a baseball glove to play catch with audience members. He tossed a baseball into the crowd and it was tossed back a few times.

Simon, who insists that he is not retiring, has ruled out further tours, but has left the door open for the occasional future performance (with the proceeds going to charity). The 76-year-old musician is adamant that this is his last time on the road.

The performance, which was staged under a fortuitous full moon, opened with a sweet, whimsical and powerful version of "America," the Simon & Garfunkel classic from the Bookends album (Columbia Records, 1968). The show, was attended by a multi-generational crowd that featured families ranging from grandparents to toddlers. Simon continued with "50 Ways to Leave Your Lover," his only solo No. 1 hit.

While Simon didn't mention his other two famous outdoor New York City performances (1981's iconic Central Park show with his former partner Art Garfunkel and his 1991 solo show), there were many tributes to his roots, younger days and mentions regarding the location of the evening's concert and his storied career. Garfunkel, who did not appear, was referenced through pictures featured in a montage on the video screen that was projected behind Simon and his large band. Simon's only guest was his wife, Edie Brickell, who provided the whistled solo that is featured prominently in "Me and Julio Down By The Schoolyard." Simon, who was clearly in a jovial mood, asked, "How fun is it to sing a song about Corona in Corona?" The question received a roar of applause that rivaled that of the song's "Goodbye to Rosie, the queen of Corona" lyric.

After he sang "Kodachrome," Simon stated, "Take that, Forest Hills High School!" This was obviously in reference to the "all the crap I learned in high school" lyric from that song. There were a number of other "defining moments" on this pleasant evening under the stars. Simon was clearly waxing nostalgic when he introduced "Bridge Over Troubled Water." He said that he had "a strange relationship" with the song. Simon continued and said, "I wrote it a long time ago. When I finished it, I said to myself, 'That's better than I usually do.' Then I gave it away and I didn't sing it for a long time... but this being the final tour, I'm going to reclaim my lost child." The song, which was originally sung by Garfunkel, was performed with a more stark arrangement than the Simon & Garfunkel version. As he sang the "sail on silver girl" lyric a plane traveling either to or from LaGuardia passed overhead causing shivers to run through many an audience member.

Other highlights included the Latin flavored rhythms of "Late in the Evening," the bounce of "Mother and Child Reunion," the world-beat and African-influenced music from Graceland (Warner Brothers, 1986), the sweetness of "Still Crazy After All These Years" and a soft and muted version of "The Sound of Silence."

The evening came to a close with "The Sound of Silence," the last song of the second encore. The crowd knew it was coming and the fact that it was "the end" was immediately apparent. The audience was so quiet one could hear a pin drop as Simon sang the classic that, over fifty years ago, was Simon & Garfunkel's breakthrough song. It was not lost on the audience that many of them would never again hear this song performed in a live setting. The magnitude of the moment was not lost on Simon, who choked up as he sang "Hello darkness, my old friend..."

It obviously meant a lot to Simon. At other shows on the tour he has vowed to continue making music. On this evening there was no mention of that. Regardless of whether he continues to release CDs or whether he plans to ride off into the sunset, this show was a fantastic last hurrah. Simon, of course, had the last word. When "Sounds Of Silence" ended, the singer-songwriter put down his guitar and surveyed the sea of smiling and cheering faces. He then stepped up to the microphone and simply said, "It means more than you can know." With that, the crowd erupted again as Simon walked off into the wings. Hollywood could not have scripted a better ending.