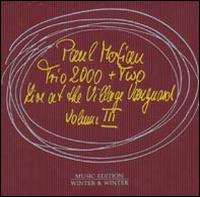 It almost seems like a challenge to the critical establishment: return to the scene of your greatest early-career triumph, 40 years later, surrounded by active musicians instead of legends, and see what happens. Drummer Paul Motian, a fundamental gear in the Bill Evans Trio's landmark Sunday at the Vanguard (Riverside, 1961), has spent many of the intervening years pianoless, whether flanked by saxophonist Joe Lovano and guitarist Bill Frisell in another classic trio, or amid the reeds and electrified strings of his own Electric Bebop Band. So it is with no small amount of audacity that Motian has spent a significant portion of the last decade piecing together a series of live dates from the hallowed New York nightclub, with pianist Masabumi Kikuchi's grinding, dense contributions front and center.

Much of Motian's music doesn't make sense on paper. Perhaps the best metaphor for his much-discussed drumming is fencing: he parries, feints, lunges and retreats, leaving huge swaths of silent territory for his bandmates to navigate. It is not that he is a quiet drummer (though his rests can resonate almost as loudly as his bass drum), it is that he dodges easy resolution at every corner. Add to that an often off-kilter instrumentation—dueling electric guitars, Frisell's effects-laden sustain, or in this case, viola player Mat Maneri's sidewinding solos—and by all rights the music should be sclerotic, frigid and unapproachable. Instead, at its best, the refracted shards of his music shimmer with a brilliant warmth. They are slivers of angular beauty, delicately served.

The results, of course, depend entirely on the strength of Motian's collaborators, personalities that must be strong enough to encounter his bomb drops and daring rests and remain intact. Kikuchi, first unveiled in his Tethered Moon trio (with bassist Gary Peacock), once seemed almost too uncompromising. He takes much from Cecil Taylor, not just the surface dissonance, but the little rumbling figures that start with little more than two fingers and then build piece by piece outwards until they consume the entire keyboard. So it was a challenging, but inspired choice to place him in the middle of Trio 2000 + Two, which on the first two live volumes paired him with saxophonists Chris Potter and Greg Osby and, on the second, also with Maneri. On this third volume, Osby is gone, which tamps down the energy a bit, but also leads to a more focused, more suite-like set of music, Potter, Kikuchi and Maneri each finding themselves with that much less room to hide.

Indeed, the first two volumes found the front line getting in where they could fit in, insistently pushing and prodding for space, ramping up the energy to make their statements early and often. "Olivia's Dream" on Volume I, or "The Divider" on Volume II were scurrying, zigzagging affairs, clustered runs from all of the soloists careening off of one another and Motian's cavernous, skittering foundation. Volume III still generates plenty of heat, but it evolves more naturally across the album's generous running time. Take "Standard Time": the album opener on Volume I, bassist Larry Grenadier quickly pushes the band into an up-tempo workout, Motian swinging harder than usual, as Potter and then Osby flutter, flip and somersault their way through 13 sprawling minutes. Here, however, it is an unassuming album closer. The tempo is more relaxed, the rests are more unapologetic, and Potter, Maneri and Kikuchi all respond more actively to one another, darting in an out of each other's solos.

It is the programming of the album that makes it extremely rewarding. As stated, Motian allows the band to build the energy organically, across an entire set of music. Patti Page's "And So To Sleep Again" opens the disc on a quiet note, Kikuchi's solo piano intro leading into a lovely legato reading that ranks with the best of Motian's ballad work. Halfway through, on "The Third Walk," the band is jaunty, if not yet overjoyed. But by the penultimate track, "Gang of 5," an opening solo by Motian—clattering, then rumbling, then finally explosive—opens the door for the band to let it all hang out, and for the next ten minutes it pushes into frantic territory, an emotional and unforced climax to the proceedings. This slow build across the length of Volume III is perhaps its most appealing feature; we know these guys can play, we know they can challenge and cajole each other, but here Motian proves he can deftly conduct them through a cohesive emotional statement, given weight by the contours of its unfolding.

Trio 2000 (whether + Two, + Three or on its own) brings out a more abstracted, avant side of Motian's drumming than heard with the Electric Bebop Band, the Frisell/Lovano trio or even on last year's demanding Lost In A Dream (ECM, 2010). The music does not have an easy entry point like his On Broadway series or his electric readings of Monk. But it is a unique sound within his discography, and an undervalued addition to the improvised discussion of the last half-decade. Volume III finds the band refining its sound, boiling down its book of highly original music from the unfettered antics of past interactions into a more centered whole. Here's to a Volume IV.

Tracks: And So To Sleep Again; Ten; The Third Walk; The Hoax; Gang Of 5; Standard Time.

Family, jazz and food, in that order.