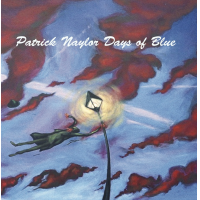 Days of Blue from Patrick Naylor spends time in all the pantone blue hues, the first five tracks bringing the brighter half of the spectrum, the second half diving the deeper tones. Beginning with "Baba," a bewitching Arabian influenced scale with mystery inspiring cascades, the album depicts a dance of sax and guitar from the start. Next up "Naggar," a delicate accordion intro from Dan Teper, peppered with sweet guitar and brushes, it's vocally unpretentious, with a stage school rather than jazz vocal.

"Rifferama," a previous Download of the Day, is a chilled saunter down a dusky road, much like the feel of the whole album. Distinctive blues guitar gently augmented by a linking bass and softly softly drumming. The sax finishes highlighting the overall pace and well placed punctuation.

"Days of Blue" intro features triangle like ting (not disturbingly), similarly clean and fresh vocal from the second vocalist, Sara Mitra. It has a lazy summer haze vibe. Accordion, musette like, fills the gaps between the guitar and cello, and captures an air of some South of France travels.

"Blue Morning" is an eerie one, hint of Twin Peaks, Chris Isaak or Ry Cooder, with a creep bass that really jumps out for blues steel guitar, the guitar glorying in a fine mid-section solo. A keyboard comp capable of filling for hours, polished off with a light sax hello feature solo, that levels out to bright and optimistic.

"Waiting" is classy melancholy mystery. Lots of intense Pat Metheny -style guitar chords along the melody, a gorgeous sax interlude, with much likeness to Branford Marsalis' soprano style, pretty klezmer lite tone in places. The song establishes a palpable sense of waiting with intrigue rather than boredom.

"Restless" is all about the high hats, a drum lead, followed by guitar voice making space for the most restless piano, which pops vivid blue.

"Lost Song" sounds like a "Where do we go from here" type tune, rather than a quagmire abyss of no return. A sax declaration supported by guitar and bass, and some bright cymbals.

"After Dark" sets the mood with clicks, chimes, rattles and shakers. A smokey sax leads with guitar, to open out briefly for piano. A likeness for Naylor's Roma-style on this track is Marc Antoine.