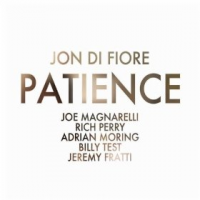 Patience is typically defined as the capacity to tolerate delay without getting upset. This works quite well as a debut album title for New Jersey-born drummer Jon Di Fiore. Patience makes an excellent case for being unhurried, the same way a person might wait to speak to say something worthwhile. Di Fiore's compositions, fleshed out by a cast of veterans like trumpeter Joe Magnarelli and tenor saxophonist Rich Perry, and up-and-comers including pianist Billy Test, bassist Adrian Moring and saxophonist Jeremy Fratti, speak conversationally with a liberal dosage of mystery.

The first and third tracks exhibit the album's wise sense of pacing. The opener, "Dis'Ability," moves with a delicate sense of adventure; a kind of wistful playfulness that seasoned but active horn players like Perry and Magnarelli personify. The lyrical waltz style appears again in "Tomorrow Will Be a Better Day," but it casts the same meter and tempo in a more mournful, downward stepping melody with the same call and response bridge, marking it as an album-wide development on an idea.

Patience also has a mature and relaxed approach to the standards material. Test's clustery chords outline a cheerily dissonant intro to Di Fiore's 5/4 arrangement of pianist Thelonious Monk's "Epistrophy," one that stays constant in the tricky harmony/meter arrangement. "Stranded in Times Square," Di Fiore's contrafact on "Alone Together," doesn't seek to distance itself from the classicist style of the original—only really adding a Charlie Parker-esque bridge to the mix—and chooses to focus more creative attention, instead, to its alternating 4/4 and ¾ solo sections (though DiFiore's inventive drum solo almost recalls the boom-bap sounds of drum and bass).

With the ego of typical debuts from young artists removed, Patience allows for lots of interplay and freedom from the players. Moring's rhythmically constant solo on "Blue Atlantic" treats itself more like a dialogue with Di Fiore. His woody but centered sound also kicks off a strong Latin intro into "Nine the Less," which also gives Test room to show his unparalleled sense of piano coloration, with DiFiore's breakdown rolling set piece textures like marbles, artistically colliding into one another. In a bold move of character, Di Fiore's "Just More Time" is a solo piano excursion, with Test restraining his handsome block chords out of respect for the melody. Di Fiore's presence as a composer and instrumentalist goes against every stereotype in the book for a drummer—and it's sorely needed.