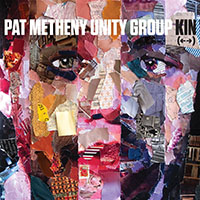 Strangely enough, the release of Kin (<—>) may be the one that most polarizes longtime fans of guitarist Pat Metheny. There are those who feel that, beginning with 2005's last recording with his then-longstanding Pat Metheny Group, that he'd become too complex, too chops-heavy and too distanced from the accessible music of recordings like Travels (ECM, 1983) and Still Life (Talking) (Nonesuch, 1987). He further distanced himself from a number of his core constituents with Orchestrion (Nonesuch, 2010), and his superb but even more challenging collaboration with John Zorn on Tap, concurrently released on Nonesuch and Zorn's own Tzadik label.

It's true that Metheny writing has become increasingly complex, oftentimes cinematic and episodic long-form compositions incorporating influences ranging from minimalist composer Steve Reich to more idiosyncratic melodic forms distanced from the more singable history of Pat Metheny Group's best and most successful work. But if an artist is to grow, he needs to have the freedom to go where his muse takes him, and if the majority of Metheny's work over the past decade has shown anything, it's been a fearless insistence on following that muse, with the hopes that his fans will join him on the journey.

Well, it now appears that Pat Metheny Group is dead, long live Pat Metheny Unity Group, an extension of the quartet that he put together in 2012, documented on the excellent Unity Band (Nonesuch, 2013), a record that, with reed multi-instrumentalist Chris Potter onboard alongside bassist Ben Williams and Metheny's drummer of choice since 2002, Antonio Sanchez, it looked like Metheny was heading in a direction that, while not exactly Pat Metheny Group, was closer to it than anything he'd done since The Way Up (Nonesuch, 2005).

Still, from textural and contextual perspectives, this was much more a playing band than the increasingly scripted Pat Metheny Group, and was not averse to lengthy solo excursions when the group hit the road for over 100 live dates in 2012. Unity Group, on the other hand, fleshes the Unity Band out to a quintet with the addition of Giuilio Carmassi—perhaps the most diverse multi-instrumentalist with whom Metheny has ever played, clocking in a total of eleven different instruments, ranging from keyboards to reeds, brass to vibraphone, and recorder to whistling. Perhaps most importantly, he also sings, bringing a texture back that has been missing from Metheny's work for nearly a decade.

While the music on Kin (<—>) is closer in spirit to Pat Metheny Group than anything he's written in that time, he's given the band a different name for a reason: Pat Metheny Group simply cannot exist without the participation of longtime keyboardist and co-composer Lyle Mays. That said, for those who've missed the epic compositional work of Pat Metheny Group, this will be the closest they're likely to get, as there's no indication that a reunion with Mays is in the cards.

So, how does Kin (<—>) stack up against Pat Metheny Group? Is it even fair to draw comparisons? And is it possible to put hopes for a PMG reunion away and, rather than castigating PMUG for what it isn't, celebrate it for what it is?

The answers? First, Pat Metheny Unity Group is the new Pat Metheny Group; second, comparisons are absolutely fair, but only in the context of an artist who has made it crystal clear that his uncompromised growth as a musician is predicated on where he wants to go, and nothing else; and third, yes, without question, there is plenty to celebrate about Kin (<—>) .

Kin (<—>) is, if anything, PMG updated with a different set of players, to be sure (other than, of course, Sanchez, who joined PMG for 2002's Warner Bros. release, Speaking of Now), and with lessons learned by Metheny both compositionally and texturally over the past decade. Artists like Metheny rarely, if ever, stand still after all, and so it's no more reasonable an expectation for Metheny of 2014 to sound like Metheny of 1978, 1989, 1997 or 2005; at the same time, Metheny's voice is so distinctive that, from the very first note, it's instantly recognizable—a guitarist often imitated but never copied. And it's not as if Metheny hasn't changed personnel in PMG over the years; only Mays, in fact, dates back to the beginning of the band, and if PMG bassist Steve Rodby is no longer a group member, he remains part of the Metheny team as a co-producer and video director, listed as associated producer on Kin (<—>).

What Unity Group does, with the addition of Carmassi, is expand the palette of Unity Band so that it possesses a similar orchestral potential of PMG. Add to that Metheny's Orchestrionics—having reviewed the first Orchestrion album in 2010, it turns out to have been an error to suggest that it was going to be a one-time project, as Metheny has, time and again, worked with a new means of generating sound and, once honed, simply added it to his existing arsenal of acoustic, electric and synth guitars. That now includes a smaller, more road-portable version of the Orchestrion.

But Pat Metheny Unity Group doesn't just rely on significant multi-instrumental contributions from Metheny and Carmassi; It has been years since Potter has been called upon to contribute as many saxophones, clarinets and flutes as he has here (a total of six instruments; live, he will apparently play even more). While Ben Williams proved, on Unity Band, a superb addition on acoustic bass, here he also doubles on electric; and even Sanchez moves away from his kit for a feature on cajón.

While Carmassi is an important addition to the group, it should be noted that he's largely in a supporting role; Metheny and Potter remain the primary soloists, with Williams and Sanchez also getting some space. Unity Band demonstrated Metheny's desire to work with a real playing band again, the way PMG was in its earliest days, before it become so reliant on structure that everything, solos included, were predicated on strict definition. Kin (<——>) finds a very happy medium between the expansive writing for which Metheny has become so known with PMG, and the greater improvisational freedom afforded on projects like 80/81 (ECM, 1980), Song X (Nonesuch, 1985)...and Unity Band. With four of Kin (<——>)'s nine tracks clocking in at over ten minutes—the opening "On Day One" a full quarter-hour—Metheny still explores the growing multiplicity of elements that have been gradually added to his compositional arsenal over the decades.

"On Day One" is, perhaps, the best example of this happy medium. Opening with a rubato theme that should challenge any core constituents who suggest Metheny has lost his way with melody, it soon turns to a polyrhythmic mélange of percussion and hand claps, for an irregular-metered theme doubled on guitar and Orchestrion marimba. When Potter enters, the theme takes a rhythmic and melodic twist before returning to its primary motif as Metheny moves into a middle section redolent of Steve Reich's pulses, as a lead-in to a bar-raising first solo from the guitarist that feels more open-ended than '90s-'00s PMG solos—as does Potter's, which follows. The impression—whether or not it's true—is that these are not solos of predefined lengths but, instead, are up to the soloist (and, perhaps, Metheny) to define when it's time to come to a close. And if they are predefined for the recording, the sense remains that they'll be of undetermined duration in performance.

"Rise Up" is driven by Metheny's heavily strummed acoustic guitar, reminiscent of older album like As Falls Wichita, So Falls Wichita Falls (ECM, 1981), but with hand claps and Sanchez's combination of cajón and cymbal washes setting the tone, it turns into another Metheny original possessing unequivocally singable melodies—this time, largely articulated by Potter's soprano, before Metheny joins in for the second time around.

It's hard to know if the problem some longtime fans have is with the extensive soloing, but if that's where Metheny's head is at, he's sure doing it in a way that doesn't neglect his ability to create richly textured compositional contexts and accessible melodies. These are not "head-solo-head" pieces, but epic in the best sense of Metheny's now forty-plus year career. And if Metheny has, in the past decade, seemed more about creating complex pieces that, with their greater number of layers, felt more eminently accessible—only revealing their compositional depth on deeper investigation—there are a number of pieces on Kin (<—>) which easily hearken back to that approach while still incorporating lessons learned in the ensuing years/decades.

The soulful but electronics-driven "We Go On," with its strong backbeat and poppy melody, could easily be an outtake from We Live Here (Nonesuch, 1994); the brief, through-composed "Adagia" feels like an unreleased track from his Grammy-winning Secret Story (Nonesuch, 1992); while the balladic closer, "KQU," could easily have fit on the 80/81 sessions.

That Metheny is consolidating past efforts, as he enters his sixties, is really nothing new. Are there hints of First Circle (ECM, 1985) or The Way Up to be found on Kin (<—>)? Absolutely. Anyone who has followed his career knows that almost every step Metheny has taken forward has also been about bringing along what's come before. Kin (<—>) may not be Pat Metheny Group of old, but with nearly a decade gone by, like it or not, that group is now a thing of the past. Pat Metheny Unity Group is the new PMG, and Kin (<—>) is as strong a statement as could be expected from an artist who has, over the decades, consistently pushed himself into new territories with fresh colors, previously unheard compositional constructs, growing acumen as a guitarist—and new musical partners to help him realize wherever his muse is taking him.