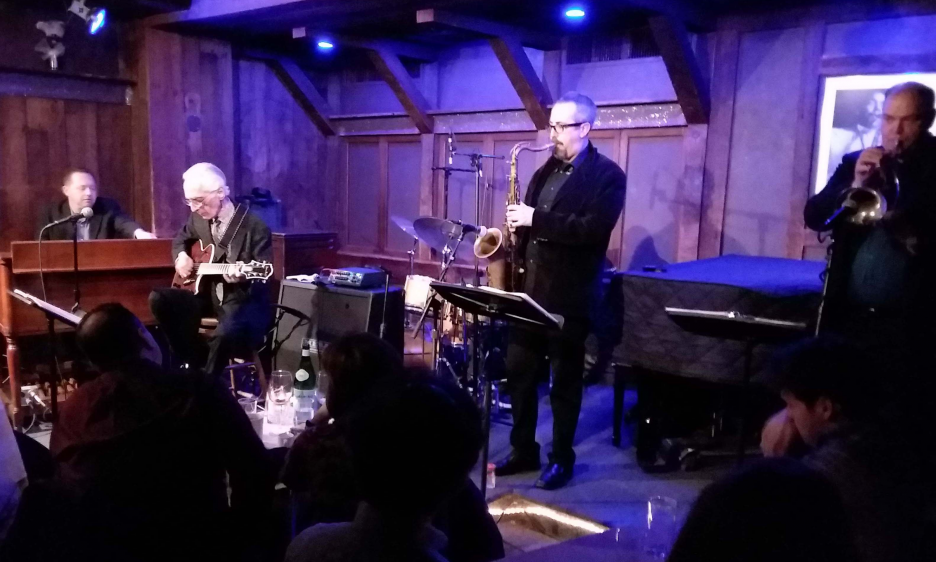 Legendary guitarist Pat Martino has recently made it a point of periodically performing at Chris' Jazz Café in his home town of Philadelphia. The management welcomes it because he has a large fan base and plays to full houses. This reviewer appreciates it because a) he bonded with Martino fifteen years ago after interviewing him for this website; and b) it gives him a chance to follow his remarkable evolution, especially with his current quintet, whose debut album, Formidable (HighNote, 2017) is now making the circuit.

Despite the disruption of his career in the 1980s by memory loss from brain surgery for an arteriovenous malformation, Martino has proven himself for over a half century to be one of the most consistent players in the history of jazz. Still, the differences from one session to another are intriguing, and it is also of interest to experience his groups as they develop over time. Following his participation in Willis "Gator" Jackson, Jr's quintet in the 1960s, Martino has periodically led his own groups, whose legacies are attested to by many groundbreaking recordings. The current quintet embodies a synthesis of soul blues with contemporary mainstream approaches. The trading off and mutual learning between Martino and his cohorts, all of whom are younger than him, are fascinating to hear.

This particular set was part of the second engagement at Chris' by the quintet since the release of the Formidable album. In their show last Thanksgiving, as in the then newly released album, the music had more than hints of the 1960s Jackson group that birthed Martino with its soul music emphasis. In this set, on the eve of Easter, the "Gator" influence continued, but the group revved up its drive like a hyrdroplaning speedboat. And the two horn players, Adam Niewood on tenor saxophone and Alex Norris, Jr. on trumpet and flugelhorn, provided an extensive mix of improvising styles that were like lightning flashes of horn players across the generations. There are jazz sets where the musicians throw themselves relentlessly into full throttle. This was one such time.

John Coltrane's "Impressions" has been a staple of Martino for a few decades, and he usually holds back a little on the tempo the way Trane did. Here, he moved the pace up a notch and played it with his trademark "formidable" intensity, speed, and virtuosity that stuns people when they hear it. His solo set the stage for organist Pat Bianchi to follow suit with fireworks of riffs. Drummer Carmen Intorre, Jr. caught the idea full square, and from then on, the whole group grabbed onto the unstoppable rhythm, using the chance for acrobatics at every opportunity. Norris' trumpet took a hard bop approach, in contrast with Niewood's Gator-ade inflections, as they got on the fast-moving train.

The flash drive continued with Hank Mobley's "Hipsippy Blues" and Joey Calderazzo's "El Nino," both of which frequently appear on Martino's recent set lists and give him an opportunity to be especially inventive with his improvisations. Charles Mingus' "Duke Ellington's Sound of Love," a somewhat brooding ballad, provided relief from the unrelenting pace. (It made me wish Martino would play "What Are You Doing the Rest of Your Life," a song to which he adds unearthly beauty.) Niewood's solo captured the flavor of Ellington's saxophonists Johnny Hodges and Paul Gonsalves.

The set concluded with lots of action with Wayne Shorter's "Footprints," and Martino's "The Great Stream" (from his 1972 Muse date, Pat Martino Live!). Niewood took hold of some of Shorter's ideas, and Norris did a brilliant flugelhorn solo that captured what Clark Terry and Art Farmer did to put that instrument on an equal par with the trumpet. The set exemplified the quintet's ability to move between bebop/hard bop, post-bop, and soul motifs with great facility. Martino seemed delighted to hear the group move forward in this way, and it stretched his own playing considerably in a modernist direction.

The success of this set, as well as the album Formidable owes a lot to drummer Intorre. He provided enormous propulsion, and he skillfully adjusted his playing to provide the group just what they needed rhythmically at every moment.

As we all know, nightclub atmosphere can range from the sublime to the ridiculous. Chris' Jazz Café, which has survived economic vicissitudes that led to the demise of a number of other jazz venues, deserves kudos for the way they have rebounded from some dark times in the local jazz scene to become an ideal venue for the music. Recently, the warm, friendly, and accommodating staff, the quiet policy during performances, and the excellent food and drink, have all made Chris' a wonderful place to go for a jazz experience in the City of Brotherly Love.