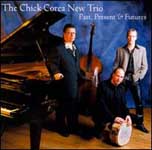 Putting Origin on the shelf for a moment, Chick Corea sets about getting intimate with the band's rhythm section on this invigorating trio release. Corea also takes this opportunity to premiere 10 entirely new compositions as well as a lively reading of Fats Waller's "Jitterbug Waltz." Together with the phenomenal Avishai Cohen on bass and Jeff Ballard on drums, Corea continues with the kind forward-thinking acoustic jazz that has made Origin so appealing over the last several years. The opening minor blues, "Fingerprints," strongly recalls his first classic trio with Miroslav Vitous and Roy Haynes. "Rhumba Flamenco," "Anna's Tango," and the closing "Life Line" are typical of the Spanish-tinged lexicon he's been developing since early on, but most recently with Origin and Gary Burton.

If anything, Corea's new music is more heavily composed than usual. Its involved, tightly executed passages evoke a sort of chamber-jazz feel that brackets relatively short episodes of fiery, free-flowing improvisation. But "The Chelsea Shuffle" and "Cloud Candy" open up a bit more, while "Nostalgia" changes the pace with its mellow, semi-classical feel.

Like Pat Metheny, who recently formed a trio with Larry Grenadier and Bill Stewart, Corea recognizes the importance of forming deep associations with the new generation of jazz greats. Of course, Avishai Cohen and Jeff Ballard gain enormous prestige through their work with Chick. But Chick also keeps himself fresh and on his toes by working with these younger stalwarts.