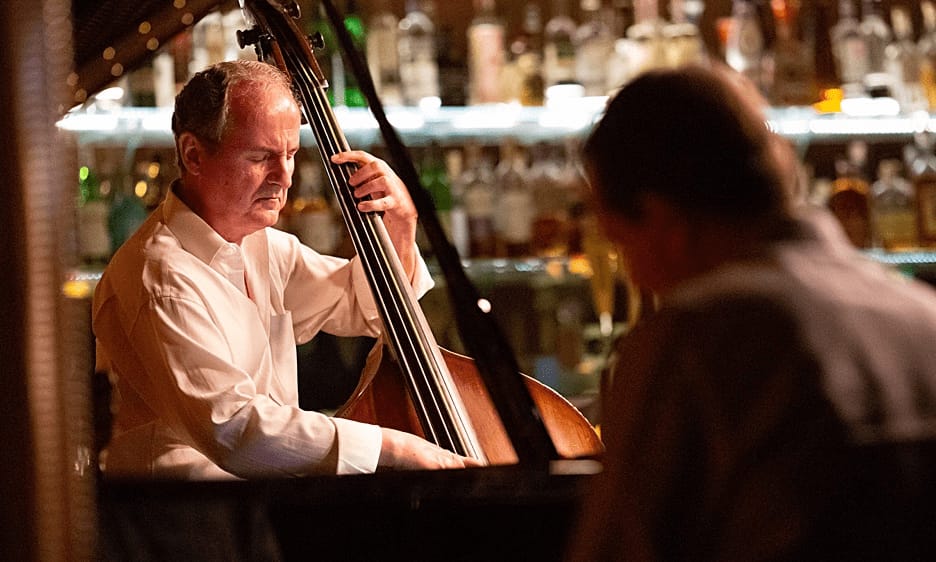 By JIM WORSLEY
July 14, 2021
Sign in to view read count
"We've known each other and have been playing together for fifty years now," was proudly, if even more sentimentally, reminisced by pianist Alan Pasqua in reference to drummer Peter Erskine to an intimate and appreciative audience at Sam First in Los Angeles during a recent performance. Bassist Darek Oleszkiewicz, who has been part of the mix for a "mere" twenty years, rounded out this stellar and superbly connected trio. Pasqua's warm hearted moment also included a remembrance of the late pianist Jaki Byard. Byard, you see, was one of Pasqua's instructors back in the day at the New England Conservatory of Music in Boston. One that he has a special fondness for.

A modern and ambient jazz club, Sam First's sound system and sight lines were surely part of the evening's magic. To Pasqua's delight, the club had just brought in a sweet Yamaha C7. The keys are yet only as strong as the pianist massaging them. Like so many things this night, it was a perfect union. The trio played two engaging sets, both brimming with originals and a few reimagined standards.

Recovered from some recent health issues, Erskine related, prior to patrons arriving, that "I feel better than I have in years." He looked great, as well. No doubt, as the evening wore on, seeing the drumming icon smiling from ear to ear and being in such good spirits, was another piece of the mosaic that fit together, bringing joy and full hearts to the room. The always quick witted Erskine was in top form, both on and off his Tama kit. The smile on his face, as he astutely listened to Oleszkiewicz's deft changes, and conversed in kind, was worth the price of admission alone.

The trio set the tone early opening with a sprite rendition of the classic "Body and Soul." A Pasqua original, "Old School Blues," followed and immediately took the connection within the trio and with the audience to the next level. A fan of Keith Jarrett, Pasqua's next tune was in his honor. "New Hope" not only featured Jarrettesque lines, but also a wonderful symmetry with Erskine and Oleszkiewicz. The New Orleans vibe of "Gumbo Time" ignited the pulse and emboldened the trio's mettle. It was easy to get lost in the moment on this imaginative Pasqua tune, especially with Oleszkiewicz digging his "heels" into his upright and Erskine floating with such seeming ease with an array of stick and brush work. The momentum was sustained by jumping into the Oleszkiewicz penned "The Honeymoon." The gloriously upbeat and smartly crafted number had the joint swinging and the trio highly engaged in creative conversation. In just the right moment to slow it down a bit, Pasqua's serene take on Jimmy Webb's "Wichita Lineman" drew an emotive, nearly tearful, reaction from a now completely enthralled audience. Closing the first set in a highly melodic, yet still touching manner, Pasqua first spoke of our loss of the great Chick Corea, before introducing his original tribute entitled "Dear Chick." The song captured Corea's melodic sensibilities and certainly his clever and plentiful changes. A dynamic close to a golden first set, to say the least.

"I hope you are enjoying it," exclaimed an enthusiastic, if not slightly out of breath Oleskiewicz, during the break. A smile and a shake of my head that indicated "Wow" was all I could muster in the moment. His broad and engaging smile indicated that he caught my drift. The gentle buzz in the air personified the mood they had created. Pasqua added, that because of the pandemic, "he had forgotten just how wonderful and amazing it is to play with these guys." For sure, it felt like a night of redemption for everyone fortunate to be at Sam First this evening.

They came out gliding right back into it with Dizzy Gillespie's "Con Alma" to open the second set. Pasqua then dedicated "Greta," a sincere original, to his daughter who was in attendance. Yes, another special moment in an evening chalked with them. And, yes, it was then about time we heard an Erskine original. "Three Quarter Molly" featured Erskine at his best. So rhythmic, so versatile, doing so many things, and making it look easy! To witness a legendary drummer from maybe three feet away is nothing less than a very special treat. Two more Pasqua tunes, "The Folks" and "The Turnaround" kept the intuitive and imaginative dialogue going at a comfortably brisk pace. Oleszkiewicz was again alternately caressing and relentlessly driving his upright while simultaneously co-driving the pace with Erskine. This duo, inside the trio, is a remarkably fine tuned rhythm section. It didn't come as a surprise that a Byard composition was in the mix. Byard's "Chandra" was played with equal gusto and respect. Honoring a request, Erskine led the trio through an energized and cerebral stroll through "Bulgaria." The Erskine composition closed the set and the show.

The popularity of piano trios has never waned throughout jazz history. While not every show you see and hear from upper tier jazz cats is going to reach you at your core, the full range of notes on a piano, coupled with a top functioning rhythm section, is a tough combination to beat. Sometimes less is more. The trio could be considered the perfect melting pot of creativity, complexity, and rhythm, pollinated with spontaneous interplay and intelligent conversation. At its finest, jazz elevates well beyond the many notes and melodies. It has the power to transcend the mind and the mood. While the craft continues to evolve, and wonderfully always will, in one man's opinion, Pasqua, Erskine, and Oleszkiewicz are as good as it gets in today's contemporary jazz scene.

NOTE: The You Tube video below is from the very night described.