By GLENN ASTARITA
December 8, 2017
Sign in to view read count 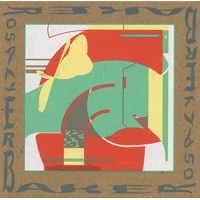 If you're a free-jazz experimentalist or basically open-minded, then a glimmer of paradise might become reality after listening to this off-centered, sinewy session that occasionally sounds like it's bursting at the seams. And while its largely discordant, the musicians' polytonal exchanges and sound-sculpting mechanisms generate loads of interest, coupled with the trio's unsystematic musical lingo.

Erb's oscillating tone poems and feisty improv with Baker, who extracts a rather amazing array of sonic attributes from his analog synth, hover atop Rosaly's multifaceted percussion patterns as the band works through fragmented and bumpy cadences. For example, on "Paradise One," Erb's twirling, free-form lines and Baker's steely and grinding EFX are peppered by the drummer's sweeping brushes and colorful cymbal swashes. Hence, the musicians delve into minimalistic movements and mimic each other amid the acoustic-electric frameworks while intersecting, cascading and reinventing sub-themes on a continual basis.

The excitement factor remains intact on the 2nd and final extended piece, "Paradise Two." Here, Erb's gravelly intonations and fluttering notes complement Baker's manifold electronics explorations, including distortion-streaked bass notes and a mass of highly imaginative manipulations. As the story unfolds, notions of angry old men engaged in a heated argument or perhaps settling a few scores came to mind. No doubt, this spellbinding effort is performed by artists who seemingly communicate on a higher plane of existence.