Home » Jazz Articles » Paris Jazz: A Guide, from the Jazz Age to the Present

Paris Jazz: A Guide, from the Jazz Age to the Present 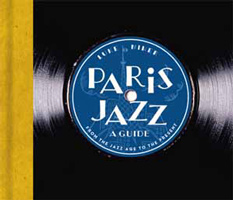 It would be difficult to overestimate the influence that Paris, much like New Orleans, Chicago and New York, has had on jazz music, its health and evolution both in America and internationally. As such, it would take volumes to document the story thoroughly—significantly more, at any rate, than the 156 pages in Luke Miner's pocket-sized (well, for a big pocket) Paris Jazz: A Guide. Paris Jazz makes no claims toward comprehensiveness, however, and instead aims to be a companion to the jazz fan who finds himself on a Parisian musical pilgrimage of sorts, or perhaps eager to explore beyond the city's de rigueur tourist spots like the Eiffel Tower and Notre Dame.

The book is arranged according to neighborhood and, insofar as it's possible, chronology, beginning with Montmarte and Louis Mitchell's Jazz Kings circa 1918, and concluding with Saint-Germain-des-Prés and the declining health of Lester Young and Bud Powell. It offers pithy and engaging overviews of larger Parisian jazz establishments as well as smaller ones, including their pre and post-jazz history, their place in a wider musical context, famous (and infamous) performers and clientele, relevant photographs, anecdotes, quotes, up-to-date contact information, and maps indicating extant venues and the original sites of now-demolished clubs such as the Grand Duc, Bricktop's and the Hot Club de France. At the end of each chapter, Miner lists venues for catching live jazz gigs today. The book itself is capped off with more jazz venues (some mentioned earlier in the book), a brief list of recommended listening, and a selected bibliography.

Though the oppressively pedantic might have niggling complaints (that, for example, the ballet Parade was written over 1916-1917, not 1917 alone), Paris Jazz doesn't really enter into enough specific detail or speculation to take issue with any information it puts forward; but what it does offer should be more than enough for the kind of walking tour the book lends itself to. Even the armchair traveler might enjoy a copy for the coffee table.

The publisher has provided Paris Jazz with a sumptuous layout, with full or double-page black-and-white photos in most of the individual venue descriptions, clearly labeled multicolor maps complete with nearby Metro stops (venues are also cross-referenced by corresponding letters and numbers in the text itself), and a grooved hardback cover resembling a vinyl record. Thanks in part to this aesthetic bonus, as useful as it is attractive, Paris Jazz serves equally well as an introductory overview to Paris' role in jazz history and the present day, a quick refresher course, or a practical tour guide.