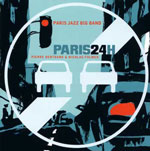 Having never been to Paris, I can't bear witness to the accuracy of the Paris Jazz Big Band's musical portrayal of a dozen of the city's well-known landmarks and experiences during a typical day. What I can say is that Paris 24H presents a colorful and charming snapshot of Europe's leading tourist destination, one that beckons the indecisive traveler to come share the adventure. The idea, say co-music directors Pierre Bertrand and Nicolas Folmer, was to "give free rein to our impressions and images of the city. We have thus rendered twenty- four hours [in] the life of an imaginary observer in Paris into music.

What strikes one immediately is that Paris has a rhythm—make that rhythms—of its own, and that the PJBB expresses them in various ways, even employing the services of no less than four drummers, all surnamed Ceccarelli, on the brief "Metropolitain, written by one of the aforementioned timekeepers, André Ceccarelli (who also guests on "Tuileries"). The other beguiling numbers were composed either by Bertrand (six) or Folmer (five).

Someday, perhaps, I'll have a chance to visit Paris and experience its many wondrous sights and sounds for myself. Until then, I at least have the Paris Jazz Big Band's musical embodiment to remind me of its fascinating variety and enduring charm.