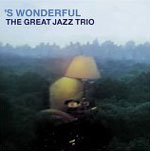 It's hard to believe that when he inaugurated the Great Jazz Trio in the mid-1970s, pianist Hank Jones was approaching sixty. At that point he'd already built a long, prestigious career working with virtually every significant mainstream jazz artist to emerge since the late 1930s. It's even more remarkable that, thirty years later, not only is Jones still going strong—with a recording and touring schedule that would wither those a quarter his age—but he manages to retain a certain identity for the Great Jazz Trio that differentiates itself from his own work as a leader.

It's no exaggeration to say that Jones' career has been all about collaboration, but it's even more fundamental for the Great Jazz Trio. The pieces may be well-heeled, but by constantly changing the rhythm section, Jones has kept one of the most centrist trios around sounding fresh and alive. The group's latest, 'S Wonderful, was released in Japan earlier this year by Sony Music, but is finally seeing North American release on 441 Records, whose subsidiary Test of Time Records reissued a series of Japanese 1970s Great Jazz Trio recordings earlier this year. Listening to those 1970s Village Vanguard recordings (with the late drummer Tony Williams and bassist Ron Carter) back-to-back with 'S Wonderful, featuring bassist John Patitucci and drummer Jack DeJohnette, and it's evident that even in the most mainstream of approaches, imaginative interpretation and sheer chemistry will keep things intriguing.

DeJohnette may well be the most stylistically broad drummer in jazz, as comfortable with free playing as more defined structure—often bringing the two together on his own sometimes enigmatic recordings. But what elevates him to greatness is his ability to adapt to any context. When tackling standards with Keith Jarrett he combines his unerring sense of swing with a loose, open approach that's in keeping with Jarrett's own stream-of-consciousness playing style. Here he plays it safer, but he's never complacent, with a surprisingly outgoing solo in the middle of a relaxed reading of "Days of Wine and Roses.

When Patitucci first arrived in the mid-1980s as a member of Chick Corea's Elektric band he was strong on chops but weaker on interaction. Since that time he's evolved exponentially, with recent work in Wayne Shorter's Quartet demonstrating remarkable intuition and an ability to mesh tradition with a more forward-thinking perspective. Like DeJohnette he stays close to center here, but his robust tone and unforced groove smooth out even the stereotypical stagger of Paul Desmond's classic "Take Five.

Jones is as elegant and harmonically refined as ever, demonstrating that the mainstream needn't stifle growth. His tender reharmonization of "Greensleeves —also featuring fine arco work from Patitucci—feels completely contemporary.

It's all about collaboration, and this incarnation of the Great Jazz Trio distinguishes itself from the pack of modern day standards bearers by presenting three different generations of players, each with a clear respect and understanding of tradition, each finding new ways to tell familiar stories.