By Geannine Reid
December 7, 2018
Sign in to view read count 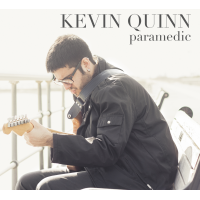 Kevin Quinn may not be a name you are familiar with on the jazz scene yet, but behind the scenes his work as a sound engineer at the ShapeShifter Lab in Brooklyn, NY, has afforded him the opportunity to work with top jazz musicians such as: Aaron Parks, David Savitsky, Rachel Therrien, Dean Sharp, Sean Wayland, Andrew Atkinson, Mark Ferber, Ira Coleman, and more. Born and raised in New York, Quinn began his musical studies on guitar when he was eighteen years old. While attending the State University of New York at New Paltz, Quinn's interest in jazz sparked. He pursued a bachelor's degree in jazz studies under the tutelage of Mark Dziuba, Vinnie Martucci, John Menegon, and Jeff Siegel. His debut album Paramedic is in part inspired by real life people around him. "Paramedic" was written for his father, "Final Fantasy" for his brother and "Morgan's Nocturne" for his girlfriend.

"Final Fantasy," the opening track on Paramedic, offers a buoyant waltz feel laid down by Siegel on drums and Coleman on bass with the ensemble kicking off a placid musical adventure. The melody has an interesting flow through a nice set of changes. This is a Quinn original; his compositional style is straight forward in its conception. Write a memorable melody, orchestrate with interesting colors and let the band loose to solo. This superlative approach works well, especially with this group. Savitsky solos first, his style is melodic, and his tone is brimming with modern jazz vocabulary, built from the bop and post-bop eras. Quinn's solo is constructed in a series of rhythmic motifs that he nimbly moves around the guitar neck. Quinn has nice mix of blues, jazz and a touch of rock in his vocabulary, which fits nicely after Savitsky's solo. Dziuba's solo presents a guitar tone that is slightly darker than Quinn's and it sounds like a semi-hollow guitar body. His solo is rhythmically motif driven, with much more activity in the scalar department. Together, the two guitarists make a great team, and both speak a fluid jazz vocabulary. Siegel's interaction with the soloist is also of note here. This ensemble is very comfortable with each other and the interaction is a joy to listen, which adds energy to the music.

"Telly Savalas" is an interesting compositional contribution from Dziuba. With a melody that traverses feel changes, the band hits and interesting counterpoint. The solo section gives the listener a chance to hear the medium swing of Siegel and Coleman, and they swing hard! Coleman sets the pulse, while Siegel dances between the pulse and interacting with the soloist. Quinn takes the first ride; his lines are harmonically rich, and his building of energy is thoughtful. His recurring use of colorful chord voicings from which he lunges into his next scalar phrase adds interest. Quinn pushes and pulls the beat, but still defines it. Siegel's cross rhythms during Dziuba's solo is very rich, and together Dziuba and Siegel develop a very satisfying musical statement. Dziuba has lots of 'Schoism' in his solo. Savitsky drives this swinger home. An ostinato provides a musical backdrop for Siegel to solo against for the ending. Overall, a fun tune with passionate playing by all.

Paramedic introduces an emerging guitarist with something to say. His compositions are thoughtful, and his playing is focused. Joined by a stellar cast, the ensemble cranks out a succinct program of memorable performances.