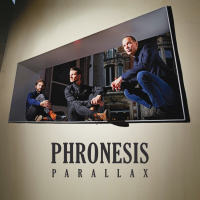 Parallax (noun) "the apparent displacement of an observed object due to a change in the position of the observer." This phenomenon is exactly how the listener new to Phronesis' oeuvre would perceive this, their sixth album recorded within the last decade.

"67000 MPH" for example, is a whistle stop tour of musically-defined gravitational resistance. The mad tempo changes and frequent erratic structural modulations characterise this frenetic opening number penned by Anton Eger. But in spite of this wild compositional metamorphosing the music is absolutely gripping. The initial fractured nature of Ivo Neame's "Ok Chorale" is soon resolved with undulating waves of light and shade from all three musicians playing together almost telepathically.

The tentative start to Jasper Hoiby's "Stillness," via sombre arco bass, belies its subsequent robustness propelled by Neame's florid piano and Eger's tumultuous rhythmic pulse. A breathing space is afforded in Neame's delicate ballad, "Kite For Seamus" at odds with the ensuing juddering explosions of Høiby's "Just 4 Now," his bass lines vibrantly percolating through the morass of piano and drums.

There is a considerable staccato element to Eger's "Ayu," emphasised by Eger's driving percussion, but typically there are paradoxical passages of near-tranquillity too. In contrast to the melee, Høiby's ballad "A Silver Moon" exudes sensitive fragility and a keen and haunting melody. The spaces here allow bass and piano in particular to interact magnificently.

In sections of Ivo Neame's aptly titled "Manioc Maniac" his rambunctious piano begins at times to channel Cecil Taylor whereas the concluding number, Eger's "Rabat," gradually resolves into a more coalescent form, centred around repeated chord patterns which permit some release to the built-up tension, finally drawing the piece to a relatively sedate close.

In truth, Phronesis are one of the most exciting jazz trios around. Although initially bassist Høiby's brainchild, the band is democratic both in terms of the prominence of all three musicians, each of whom are virtuosos in their own right, and also by the equal sharing of the composing duties. But crucially, the sheer energy that's generated from this album is simply phenomenal.